A unique Draft Combine ahead for Albury’s Spargo 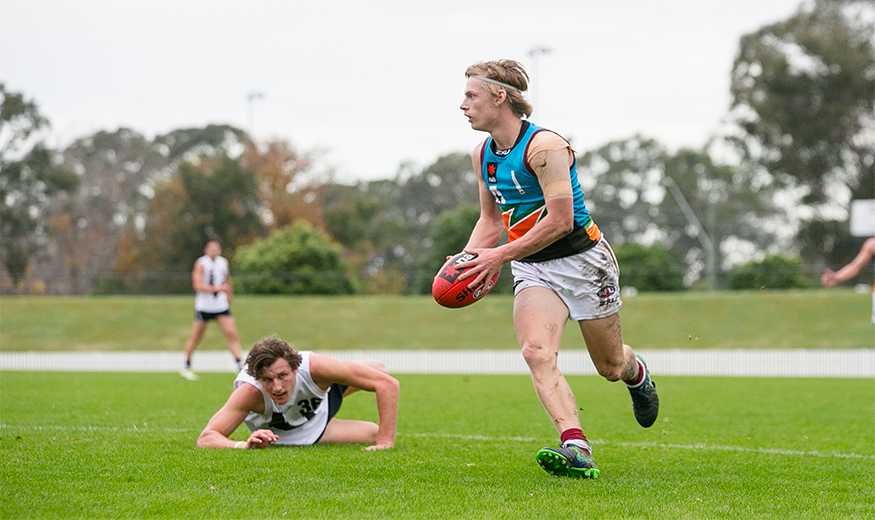 For most teenagers, hitting their 18th birthday is all about the celebration. For Albury’s Charlie Spargo, he is hoping it will be about media calls and club meetings, with his birthday landing the day after the 2017 NAB AFL Draft.

While Spargo has his fingers crossed that he will be celebrating two milestones at this time, he is cautious in the lead up to the Draft period.

As one of the five AFL NSW/ACT players to be invited to the 2017 NAB AFL Draft Combine next week in Melbourne, Spargo’s preparation has been of a ‘slowly slowly’ approach.

Unlike the other players who are fighting fit to test, Spargo is recovering from surgery following an injury suffered in the opening round of this year’s NAB AFL Under 18 Championships.

In what turned out to be an unlucky match for the Allies, Spargo dislocated his shoulder against Vic Country in similar timing to his teammate, Luke Robertson breaking his leg. Both were then ruled out for the remainder of the season.

“I was luckily a lot better off than Luke,” says Spargo.

“I dislocated my shoulder, so I had to have a reconstruction, and haven’t played since.

“I waited about a month to get the surgery, because I was going to come back and play, but they said I needed to have it in the end, meaning it dragged on a bit.”

As a result, Spargo will not be taking part in any of the physical tests at the Draft Combine.

“At the moment, there is still a bit to go for the shoulder, so I’m taking it slow. I’m just going down to interview and I’ll get medically screened, but that’s it.

“They told me I would be underdone, so I didn’t want to perform poorly because of it.”

As a player who had not suffered any serious injuries during his young career, sitting out on the Allies season was tough. With the team not winning a game until their final fixture, Spargo says it was more difficult to sit out than he thought.

“I struggled on the sidelines. It’s frustrating watching any team I play for, you feel like you could help but you can’t do anything.

“I’ve kept pretty positive but there are sometimes where you can get a little dark. I couldn’t imagine doing repeated injuries that keep you out for years and years. I’m pretty keen to recover as quick as I can and get back to playing footy.”

Despite the injury, Spargo has been determined to do whatever he can around it, to ensure he presents as best he can at the Draft Combine.

“I’ve been trying to get my shoulder as fit as possible, so when they screen me, clubs can see I haven’t slacked off even though I’ve been injured.

“My skin folds will still be good. My shoulder will be nice and strong. I’ve made heaps of developments since I got surgery, so that’s the kind of the stuff I’ve been doing.”

While Spargo acknowledges that this year has been one of the biggest learning experiences of his life, he says the support of the AFL NSW/ACT Talent team has assisted greatly.

Having been a part of the GIANTS Academy since he was barely a teenager, Spargo has gotten to know his talent coaches closely. When the Albury Murray region was rezoned, meaning Spargo was no longer a part of the Academy, he says his coaches were his go-to, to keep him on track.

“They’re all pretty different. Denno [Darren Denneman] has helped manage me through my whole career and Tadhg [Kennelly] more specifically as a Coach.

“And Saddo [Jason Saddington] through all my stuff with the GIANTS Academy that went on. He was pretty good at keeping in contact with me considering I was in Melbourne.”

Spargo has spent his final year of school, boarding at the prestigious Melbourne Grammar, almost four hours from his home in Albury.

“It was pretty tough at the start, but with footy and everything keeping you busy, you don’t really have the time to think about being away from home.”

Though there was a transition period for Spargo during his big move to Melbourne, he says he would love to stay, should one of the ten Melbourne clubs come knocking.

“I’d like to stay in Melbourne, it’s closer to home. But I’d also like to go to one of the New South Wales clubs too. I’ve got family in most places around Australia, so I would be comfortable anywhere, but ideally I’d stay in Melbourne.”

Family is where the passion for AFL was drawn with Spargo’s father, Paul playing for both North Melbourne and Brisbane during the 1980s. It is North Melbourne that Spargo supports, however he is ineligible for father-son selection, as Paul fell 10 games short of the 100-game requirement.

Despite this, Spargo has worked enough to be Drafted in his own right. Having begun playing footy at the age of six at Albury Auskick, and progressing through to play for the AFL NSW/ACT Rams, he was named the Alan McLean Medallist for the best player of the Division Two NAB AFL Under 16s Championships in 2015.

Moving next to the NEAFL – for one game prior to rezoning – and then on to the Murray Bushrangers and Allies, Spargo hopes there is just one more selection to come. AFL NSW/ACT State Manager for Talent and Coaching, Darren Denneman says he has ‘good credentials’ heading into Draft night.

“Charlie is a quiet leader whose football IQ makes him stand out among others,” says Denneman.

“He is a small, versatile, inside-type, who can push forward and cause damage to opposition with his ability to read the game and mark the ball in contested situations.

“Charlie has a good skill set by either hand or foot, and is hard working and aggressive.”

Touted as a possible first-round pick by the Melbourne media, clubs in the market for a midfielder could be calling Spargo’s name on the eve of his birthday – one mighty gift he would love to receive.

“I’m a little bit nervous. It would be great to go first round, but I just need to find my way onto a list, and I don’t really mind how I do that.”

Charlie Spargo will join 82 players from around Australia at the 2017 NAB AFL Draft Combine on 3-6 October 2017 at Etihad Stadium in Melbourne. Stay tuned to the AFL NSW/ACT website, Facebook, Instagram and Twitter pages to keep up-to-date throughout the week.