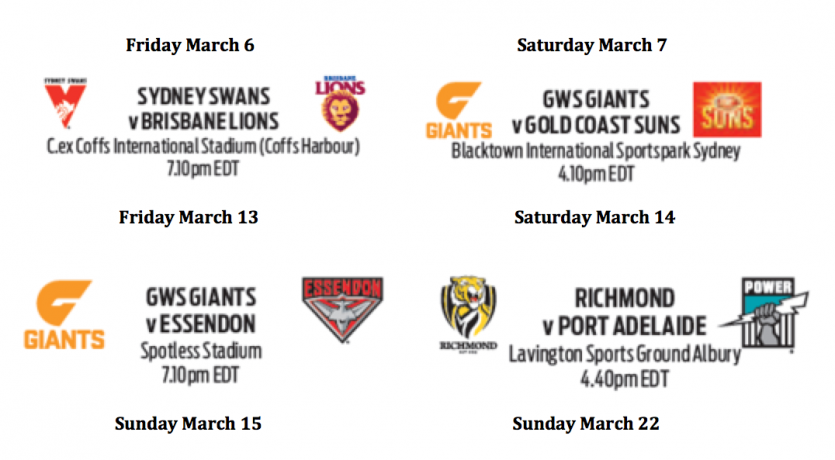 The Sydney Swans and Greater Western Sydney GIANTS will play three matches apiece during the NAB Challenge, including a match-up against one another in Canberra on the final day of the competition.

In a fixture full of landmarks for the region, Spotless Stadium will host its first Friday night match, Coffs Harbour will have its first match broadcast live on Television, and an inaugural NAB Challenge match will be played at Drummoyne Oval in Sydney’s inner-west.

“Having six games spread across six venues is a fantastic result for AFL in NSW/ACT, and it’s especially exciting to be taking elite level football to regional areas,” Bolton said.

“The NSW and ACT NAB Challenge fixturing provides a great mixture of matches at facilities that regularly host AFL matches, such as Star Track Oval in Canberra and Spotless Stadium in Western Sydney, along with smaller venues that aren’t normally exposed to top-flight football.

“The concept of playing pre-season games in regional areas is something I strongly support, and the benefits these games will provide those areas are countless.”

While either the Swans or GIANTS will feature in five of the six matches scheduled for the NSW/ACT, Lavington Sports Ground in Albury will host a game between two powerhouse interstate clubs; with the Richmond Tigers facing Port Adelaide on Saturday March 14.

The day after that game sees a milestone match scheduled for a community football ground in Sydney, with Drummoyne Oval featuring the Swans and Fremantle Dockers.

AFL NSW/ACT State Operating and Major Projects Manager Joseph La Posta says the announcement of Drummoyne Oval as a NAB Challenge host will be a boon for the area.

“Drummoyne Oval is the only venue in NSW/ACT hosting a pre-season fixture for the first time, one of only three first-time venues across the entire competition,” La Posta said.

“It’s very exciting for everyone in Sydney’s inner-west to have the opportunity to cheer on the Sydney Swans against a quality outfit such as Fremantle, who were Grand Finalists in 2013.

“Sydney hasn’t had a pre-season match at a true suburban football ground for a number of years, so I expect a crowd of thousands to flock to Drummoyne Oval for Sunday afternoon football in the middle of March.”

For the first time in over a decade AFL club members with game access will be entitled to attend next year’s NAB Challenge matches free of charge.

In a move that puts fans at the forefront of the pre-season, those members signed up in time for the 2015 NAB Challenge won’t be charged to see their team compete.

The 2015 NAB Challenge will encompass 27 matches played across four weeks, beginning on Thursday February 26 and concluding on Sunday March 22.

Below is full list of 2015 NAB Challenge fixtures in NSW/ACT.