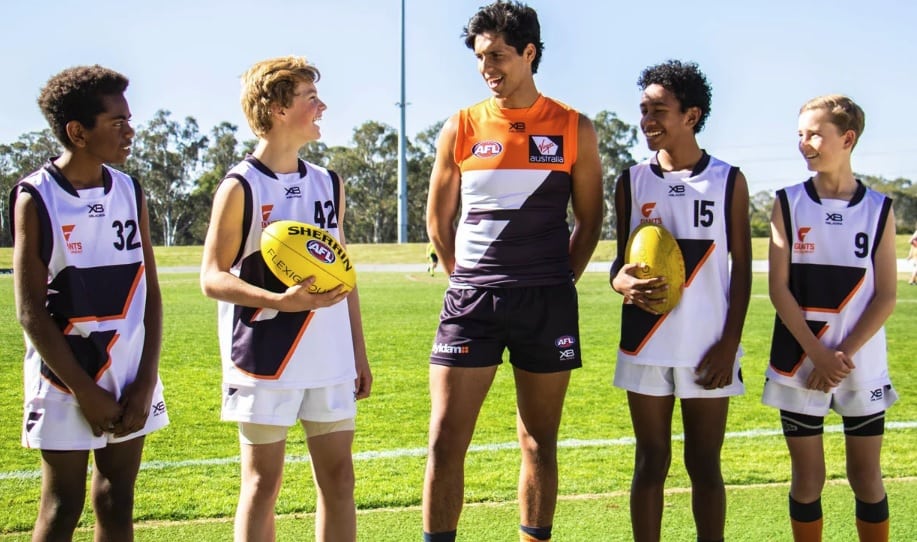 The first Peruvian AFL player, Nick Shipley, is inspiring the next generation of GIANTS.

Shipley’s mother Jessica was born in Peru’s capital, Lima and immigrated to Australia alongside her extended family when she was 14.

The 19-year-old from Campbelltown, who abandoned his first passion of soccer for Australia’s Indigenous game, worked his way through the GIANTS’ Academy to become the first player to be drafted from western Sydney by the GIANTS in the 2017 NAB AFL Draft.

After making his AFL debut in round six, his story has inspired other western Sydney teenagers with multicultural backgrounds to take up the sport and follow his path.

Don’t miss the 2018 GIANTS Multicultural Festival at Spotless Stadium on Saturday, July 28. CLICK HERE for a full guide to the festival and tickets.

Shipley recently spent the day at Blacktown International Sportspark with the next generation of Academy products.

VK Rawali (North Parramatta) and Jonothan Irima (Granville) both come from Papua New Guinea and are part of the U13’s GIANTS Academy.

Some of their Academy teammates also have multicultural backgrounds with New Zealander Jack Miller playing his local football for Campbelltown and Nathan Fokes from the Blue Mountains proud of his Dutch heritage.

Around 30 per cent of the GIANTS Academy’s 200 players come from a multicultural background, meaning they were either born overseas or have a parent who was born overseas.

Meanwhile, junior participation in western Sydney has seen a 33 per cent increase in players from multicultural backgrounds take up AFL.

“You don’t need to speak English to play footy.

“All you need to do is get the footy, move it forward and kick it through the goals. It’s a universal language.”

The GIANTS will celebrate the diverse cultures that make the game great on Saturday, July 28 at Spotless Stadium with the 2018 GIANTS Multicultural Festival. For more information on the festival or to book tickets, CLICK HERE.