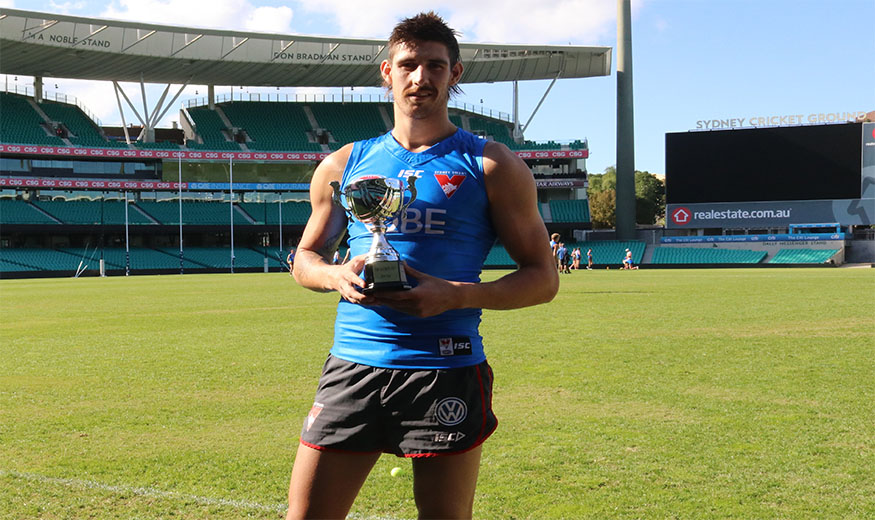 The Sam Naismith Cup will run for its inaugural year in this week, kicking off in Gunnedah tomorrow.

Naismith said it was a privilege to have the competition named after him and noted how much AFL had grown since he first played.

“It’s great to see AFL really kicking off in North West New South Wales, and to see the sport growing – especially at a grassroots level throughout schools,” said Naismith.

“AFL was growing when I was back there but over the four to five years that I’ve been here in Sydney, it’s just blossomed even more and it’s great to see everyone embracing it.”

Now measuring 206cm, Naismith says he originally got into footy after a friend invited him to a training session. It took just once session with the Sherrin to embed his love for the game.

“I was sixteen, and because there were no juniors there at the time, I went straight into the senior comp.

“Hopefully now, with this new competition, it promotes some more interest in the sport within the region, and more junior clubs can grow from that.”

The first round of The Sam Naismith Cup will be held on Wednesday, 17 May 2017 in Gunnedah, followed by the second round on Friday, 18 May 2017 in Inverell.

The final between the top two teams from each division will then be held on Friday, 26 May 2017 in Inverell.

The divisions participating in the competition include Open Boys (all ages), U15 Boys and Open Youth Girls.

Naismith’s Sydney Swans will be taking on Hawthorn at the SCG when the final of The Sam Naismith Cup is held, so he will be cheering on the teams from Sydney.

”I get back home about once or twice a year and I also head back with the club doing a few school clinics and appearances.

“It’s always good to get back to see the family and some familiar faces.”