Resilient Steane ‘Made For The Job’ 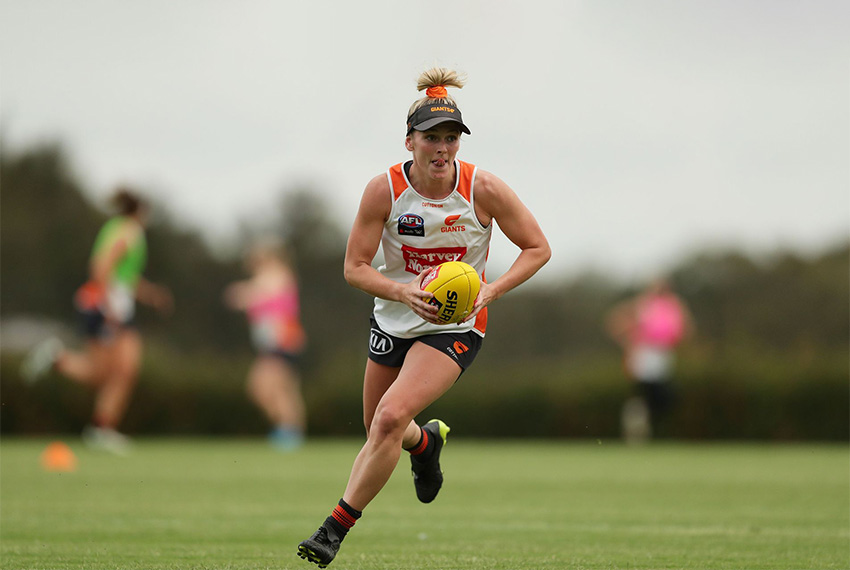 If you look through the dictionary under the word resilience, Lisa Steane’s name should be there.

The new GIANT was overlooked in three consecutive drafts until she was selected in 2019, a story which stays true to the GIANTS’ mantra Never Surrender.

Hailing from Nelson Bay or, as she calls it, “God’s country”, Steane captained the local women’s team for three years while simultaneously playing oz tag and netball. She then moved down to Sydney to explore a pathway that would give her a better chance at playing at a higher level of football.

After playing for the AFL Hunter Central Coast representative team, Steane began training with the GIANTS as a train-on one to two times a week.

While she admits that being a train-on eliminated a certain amount of pressure that some of the other girls faced, the exposure still motivated her to use the sessions to impress the coaches.

“I just kept thinking if I work really hard, they will see and eventually I will get my chance.” Steane said.

As with all sports at an elite level, it is highly competitive and chances to play at a professional level don’t necessarily come around very often.

It was former GIANTS AFLW captain Amanda Farrugia who motivated Steane to keep trying, reassuring her that she was good enough.

Farrugia is a close friend and former teammate of Steane’s, with the two leading Macquarie University to the AFL Sydney Women’s premiership in 2019. Steane was named best on ground in their grand final win.

Farrugia is ultimately Steane’s Role model, making the inaugural GIANTS AFLW captain’s retirement on the eve of the 2020 pre-season bittersweet.

“She is a teacher as well as myself, so I could totally empathise.”

Steane believes there is a strong link in qualities required as a teacher and as an AFLW player.

“You have to work with other staff, and you have to be approachable,” she said.

“You have to be able to speak to people in the right way, so they feel like you have a trusting relationship with them.”

The relationships that the recruit built during her train-on sessions allowed her to ask the coaches what she needed to do to reach that next level in her football career.

“They took the time to help me improve on those things, they invested in me, and it paid off,” she said.

The midfielder, while excited to finally hear her name read out allowed on draft day, recalls the experience as being extremely overwhelming.

“When my name got called out, that’s when I realised how many people were actually following along,” she said.

“People I played with back at home, everyone started messaging, even all my old coaches.

“I got calls from so many relatives and family and friends. My phone was blowing up.”

While Steane’s journey thus far has required determination and patience, she credits her support network in believing in her.

“I had my family and my friends and everyone saying ‘you are good enough’, and I knew I just had to keep going as long as I enjoyed myself,” she said.

Steane truly believes she was made for the job, and with her first official pre-season under her belt, the excitement hasn’t worn off.

“I am excited; even the tough parts of pre-season on a 30-degree day doing the running program it’s torture, but when you have teammates, it’s a lot better!” she laughs.

Bringing to the team positivity and an indescribable drive, it’s when the bubbly midfielder is on the field just before a game that she looks around at her friends and teammates, and thinks, “You are out there to play for them, and you want to give them everything. Then you make eye contact and you think, let’s do this.”