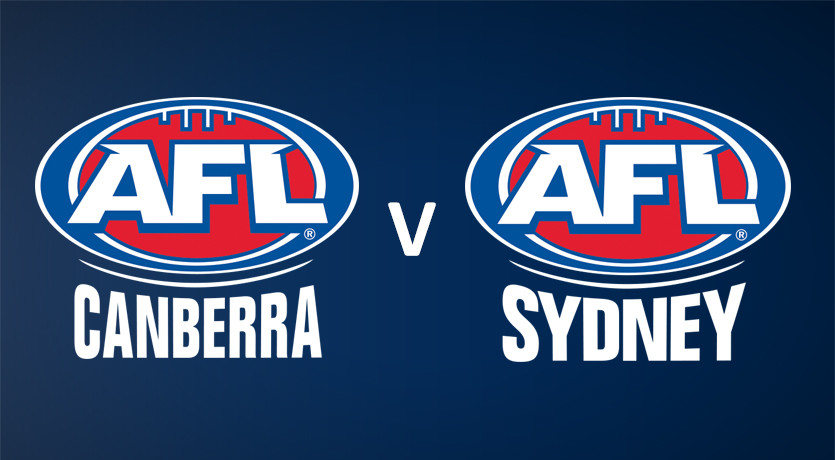 For the third year in succession the best senior female and male talent playing in the AFL Canberra and AFL Sydney competitions will go head-to-head for bragging rights.

The two matches will be played this Saturday at Gungahlin Enclosed Oval, ACT with the Women’s match being played at 3pm followed by the men at 5pm.

The women’s match will be a highly contested match after both teams came away with a win-a-piece in last year’s representative fixture.

Belconnen’s Emma Hampton is a strong runner who is often sees in and under the ball around the ground. Playing in the midfield, Hampton has an effective kick and loves taking the game on headstrong. A natural leader within the team, she is highly regarded amongst her peers.

Lael became a household name in 2015 thanks to her amazing goal for NSW/ACT against Queensland and that effort last year is typical of her attacking style. Lael’s plays an exciting brand of football and takes the game on like few others and will be looking to spark her team as she has done in previous representative encounters.

At just 17 years of age, Kate Stanton is already a star of the game and has an exciting future ahead of her. An exceptionally naturally gifted player, Kate is a real danger for opposition defences in the forward 50 as highlighted by her twelve goal National Youth Girl Championship tally which led her team to Grand Final victory and individual selection in the All – Star team to play in Melbourne later this year.

The men’s match will commence at 5pm and following a hard fought win last year, AFL Sydney is expecting a very formidable AFL Canberra side looking to return the Carter-Jesaulenko shield to the ACT for the first time since 2007.

Canberra has a strong contingent of Ainslie Tri-colours players who were last year playing in the NEAFL competition including former Balmain and East Coast player Damian Bowles who has been in sparking form this year.

Having played with Ainslie for 10 years, Ashley Harris is a disciplined player with great leadership skills. The powerfully built midfielder is strong in contest, always finding the ball and does his best to compete for the endurance of the game.

Paul is a hard running mid from Bathurst. Playing with highly developed skills, Long is not afraid to put his head over the ball or run back with the flight to support his teammates. Commuting from Bathurst every week to train and play a higher level of football clearly shows Long’s determination to make the most of his ability.

An accumulator of the football like few others, Dimery will likely spend much of his time across half back and in the midfield where he will look to set the side up in attack. At only 23 years of age, Dimery is one of the leaders of the side and has the eyes of plenty of clubs across the country on him and a strong showing could lead to even higher honours. Expect him to be leading the possession count at the end of the match.

Last year’s rep player of the year, McConnell will spend most of his time in the midfielder but can also be extremely damaging up forward as shown in last year’s rep fixture when he kicked 5 goals leading to a Best on Ground medal. A very smart player, McConnell has been in fine form in 2016 with his club side East Coast averaging better than three goals per match and will be closely guarded.

You can watch both matches Live at the following links: