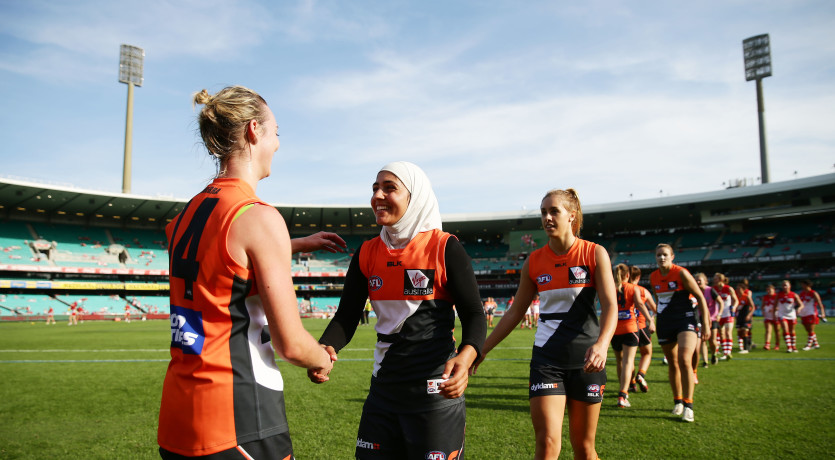 SYDNEY, AUSTRALIA - APRIL 9: GWS GIANTS Captain Talia Radan (L) and Lael Kassem (R) of the Giants shake hands at fulltime during the 2016 AFL Round 03 match between the Sydney Swans and the GWS Giants at the Sydney Cricket Ground, Sydney on April 9, 2016. (Photo by Matt King/AFL Media)

Continuing with our player profiles ahead of NSW/ACT’s match against South Australia this Sunday, we sit down with defender Talia Radan.

A mean Adelaide Crows supporter, Canberra talent Talia Radan will fulfil one of her dreams this weekend, playing at Adelaide Oval.

Often found playing across centre half-back, Radan has a good fitness base and always goes hard for the ball.

Which sport did you play before trying AFL?

I played netball for years – unfortunately playing footy wasn’t really an option for girls when I was younger.

How did you get involved in AFL?

After having two knee reconstructions in netball, I thought it was time for a change and a fresh start. A couple of friends were playing footy in the SAWFL in South Australia, and I was excited to find out I could finally play the sport I was most passionate about. My first coach was Rell Smith (current South Australian women’s head coach) who was very influential and taught me the fundamental, basic footy skills.

Do you have a career highlight?

Captaining the GWS Giants in the recent exhibition game versus the Sydney Swans at the SCG. I was very grateful for that opportunity and to represent the GWS Giants Academy.

Which women’s AFL club do you represent?

Belconnen Magpies. We have a great combined women’s/Youth Girls group. We all train together and there’s an air of excitement about what we are capable of in the next few years.

Describe one of your biggest thrills playing AFL.

By the end of the GWS Giants and Sydney Swans exhibition game, there would have been at least five to ten thousand people in the grandstands. The crowd were engaged in our game and supporting loudly – great signs for women’s AFL.

Have you had any setbacks during your AFL journey?

Whilst not in AFL, it was difficult going through two knee reconstructions. Because of it, I don’t take any opportunities to play for granted and have to always be extra diligent with the management of my body.

And which team do you barrack for in the AFL?

What are you most excited about playing as part of the NSW/ACT Open Women’s squad in Adelaide this weekend?

Playing on Adelaide Oval is exciting for me as its the sacred ground for all South Australians! But the biggest excitement is representing NSW/ACT, wearing the state jumper with pride and showing that we are serious about women’s AFL.

You can watch Talia Radan and the NSW/ACT State Representative team take on South Australia LIVE on Fox Sports 3 on Sunday, 5 June at 12:35pm (Adelaide time).