The event showcased AFL in NSW as a holistic sport which captures the imagination of the entire community. It is a game for young and old, players and spectators, volunteers and professionals.

The NSW Premier spoke about how sport unites people and communities, and acknowledged the role AFL plays in NSW’s sporting landscape across the state.

Gillon McLachlan thanked the NSW Government for its support of AFL over the years, highlighting its work in 2020 hosting a COVID-hub which enabled the elite AFL competition to proceed.

McLachlan also thanked the NSW Government for its overwhelming support of the GIANTS’ grand final appearance in 2019, which included lighting the Sydney Opera House sails orange.

GIANTS AFLW captain Alicia Eva and Sydney Swans rising star Braeden Campbell joined a panel with McLachlan and The Hon Stuart Ayres MP to discuss the growth of the game in NSW and how it can continue to develop in this state if more greenspace is provided with adequate facilities for both women and men. 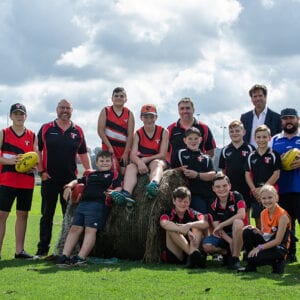