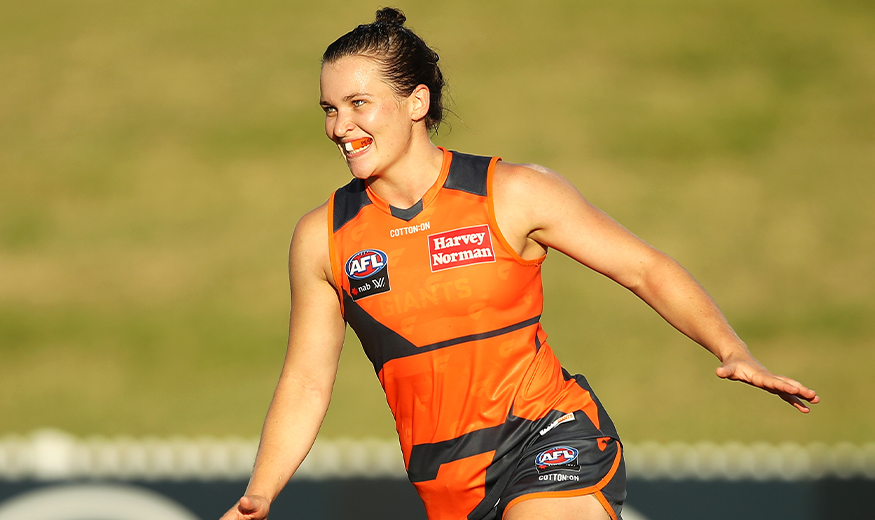 Heading into her fourth season in the AFLW, Parker has already achieved just about every accolade there is including a GIANTS Rising Star award in her debut year followed by two Gabrielle Trainor Medals for the best and fairest. She has also earned two All Australian blazers and earlier this year finished second in the AFLW best and fairest.

Parker is a superstar of the game and will only get better.

Astonishingly, in a recent interview she told the Play On podcast that she only started to consider elite football seriously in her draft year.

“I’m quite a unique story,” Parker told Ryan O’Keefe and Simon Smyth on the podcast. “I was very much a late bloomer because I loved my sport and I was playing every sport that I could. Footy was just to have some fun with my friends rather than treat it like a competition.”

Growing up in footy-mad southern NSW on a farm just outside of Holbrook, Parker learnt to kick a footy from a young age and was indoctrinated into the Richmond faithful by her father. (She remembers seeing Brett Deledio run around with the number three on his back for the Tigers when she was around six years old. It’s the reason she wears number three now.)

For better or worse, junior girls footy wasn’t as established then as it is now, so Parker played just about every sport she could, except AFL.

Eventually, it was an eagle-eyed educator who spotted her talent and had 11-year-old Alyce Parker play in a Tony Lockett Shield match with the boys. She loved it, but went back to playing casually and focusing on netball and swimming.

Diving into an elite career

Parker is clearly a gifted athlete. Now one of the country’s most decorated footballers, she was also an elite swimmer, training in national squads from around 12 years old.

She credits her time in the pool as giving her a mental edge over others who haven’t had endured such a physically demanding training regime. “To this day, there’s nothing I’ve done that was as hard as swimming – nothing as demanding,” she said. “Now that I look back, I don’t think I’ll ever do anything as demanding as swimming again.”

“It wasn’t until two years before I got drafted which was when I decided to play football for a club – in Albury, the Thurgoona Bulldogs,” she said, with school competitions the only organised footy she’d played before then.

Two seasons of football as a school student, three as an elite footballer and the world at her feet. That’s a career done right.

Ready for take off

No doubt Alyce Parker will be ready to hit the ground running when the AFLW’s season commences in January 2022.

“I had a great off-season. I’ve been home since April, studying, working on the farm, doing what I love.

“I feel refreshed, I didn’t have to stop training at all. You can run anywhere on the farm, there’s no excuse to not keep your conditioning up,” she said.

It’s a scary prospect for her rivals, and one GIANTS fans can’t wait to see bear fruit on the field.

Listen to the Play On episode featuring Alyce Parker on Spotify or Apple Podcasts or in the player below.