NSWACT Women’s team go down by two to South Australia 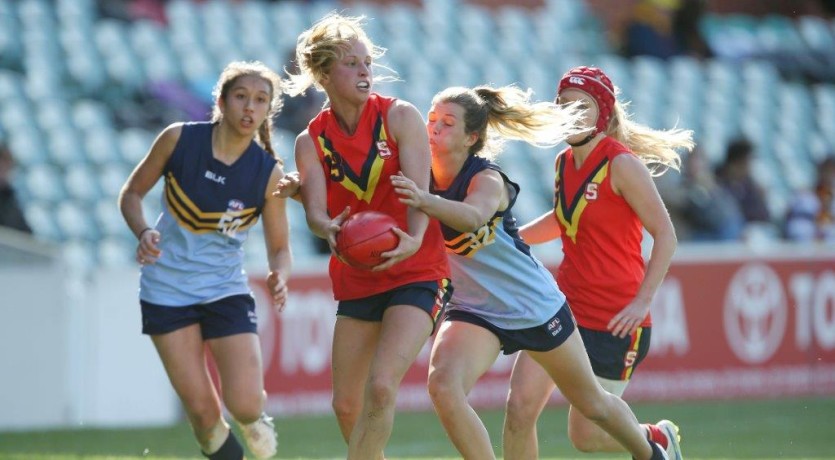 Wet weather will always bring football down to one thing: the basics.

It is here where NSW/ACT Female Head Coach, Tim Schmidt believes his squad lost their game against South Australia on Sunday at Adelaide Oval.

Heading into the final term ahead by nine points, the NSW/ACT team had all the momentum to take the win, but the slippery conditions meant their running style of play was unable to come to the fore.

NSW/ACT topped South Australia in every major statistic across the four quarters, including 25 more possessions and more inside-50s, in a match where tackling pressure was key.

NSW/ACT Captain, Talia Radan said the squad are disappointed following the loss, knowing they had their chances in front of goal but could not convert when it counted.

“When you’re significantly outplayed, sometimes you can take the loss a bit easier, but today it has been a bit hard to see our great statistics in the review, having not gotten over the line,” said Radan.

“We’re going to have to go back to our Academies and get working hard again.”

Schmidt was pleased with the efforts of his squad despite the heartbreaking loss.

“We just didn’t react quickly enough around the stoppages. We spilt the ball far too much,” said Schmidt post-game.

“But I could not have asked for any more out of the team today.

“We’ve got some things to work on. There is no doubt the talent is there. We’re looking forward to getting back to our regional Academies and getting those basics right.”

NSW/ACT’s Maddy Collier came away with ‘Best on Ground’ for the losing side, accumulating 19 possessions, five clearances, and a gruelling 11 tackles in a physical match .

After an intense final ten minutes where NSW/ACT looked promising in their forward-50, the siren sounded much to the delight of the Adelaide Oval crowd, with the home side ahead on the scoreboard by two behinds.

For now, it is back to the GWS GIANTS and Sydney Swans Academies and the local AFL Sydney and Canberra competitions, while the team eagerly await the announcement of the competition layout for the 2017 national women’s competition.