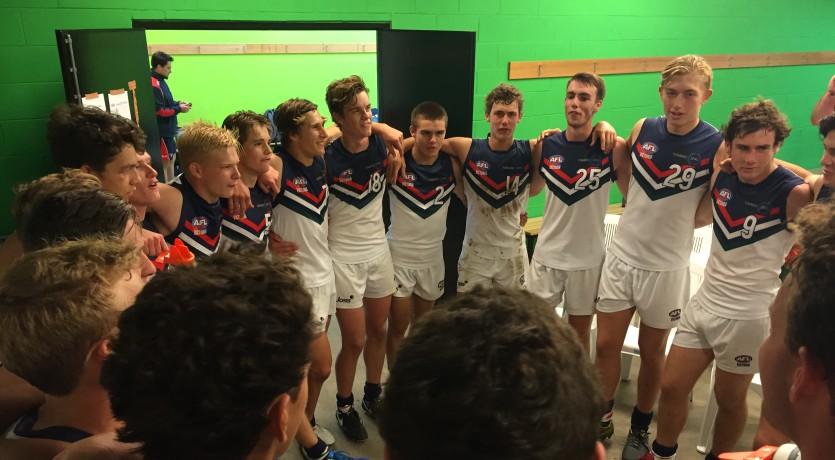 Another explosive start from the NSW/ACT U18 Rams set-up a thrilling 6-point victory in their opening TAC Cup match against the Calder Cannons.

The Rams raced to a 27-point lead by the end of the first quarter thanks to goals from Mitchell Maguire (Northern Jets), Jacob Turner (Temora), Ben Davis (UNSW) and Lucas Meline (Leeton-Whitton/Canberra Demons).

It was their second win in as many games following a 19-point victory in a practice match against Vic Country a week earlier.

NSW/ACT State Head Coach Tadhg Kennelly couldn’t be happier with the progress the boys are making.

“It was a hard-fought win against a good side,” Kennelly said.

“The team showed great character in the final quarter, sticking to the game plan until the final siren.

“The future is bright for this list, they’re very coachable and they possess an extremely high skill level.”

Harry Perryman (Collingullie-GP) and Luke Robertson (North Shore) backed up their impressive games against Vic Country with strong performances against the Cannons.

“Harry and Luke have a great desire to compete and they were superb once again,” Kennelly continued.

“They’re both outstanding prospects and that’s been evident in both fixtures this year.”

Calder remain winless in the TAC Cup while the NSW/ACT U18 Rams will be pushing for their third win from as many starts and their second straight TAC Cup triumph this Saturday (April 23) when they take on the Dandenong Stingrays at Frankston Oval.

Dandenong promises to be an extremely tough assignment having won all three of their TAC Cup matches including Saturday’s 61-point demolition of the Bendigo Pioneers.

Check the AFL NSW/ACT website tomorrow morning for the announcement of the team that will head to Victoria to play Dandenong this Saturday at 11am.

Later this afternoon the AFL NSW/ACT U16 State side will also be revealed on AFL NSW/ACT website and social media channels.