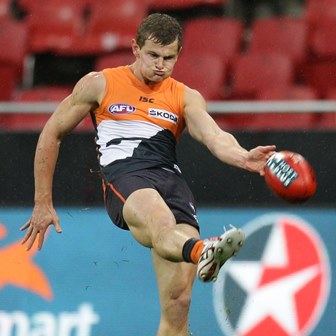 As one of the GWS GIANTS’ first three signings, it would seem that Sam Schulz has lived and breathed football for his entire life. It comes as a surprise, then, to find out that the Culcairn product only began to concentrate solely on the sport when was 17 – the age at which the GIANTS signed him.

A state representative in tennis and athletics, Schulz’s mix of athleticism and hand-eye coordination allowed him to excel at whatever sport he tried.

“I enjoyed all sports. I played a lot of tennis up until I was about 17, as well as a bit of cricket,” Schulz said.

“In the country, that’s just what you do on the weekend.”

Football was Schulz’s sport of choice from an early age, though.

“It’s kind of the dominant sport (in Culcairn) and my dad always loved it,” he said.

“I had an older brother who was just starting up when he was about six or seven. I was about four or five, so we just started in Auskick.”

Though it was always the sport in which he showed the most talent, Schulz’s affinity for football was cemented by the camaraderie he experienced from being part of a team.

“I always enjoyed the team atmosphere and that’s probably what led me to sticking with footy,” he said.

“All the towns thrive on it, the country towns that you live in – they live for the weekends when they can go out and watch the local boys play.

“I love it – the country atmosphere down in the Riverina in brilliant.”

A speedy midfielder, Schulz first caught the eye of some astute judges as a member of the NSW/ACT RAMS representative program.

“I played state with the RAMS in the 16s and then 18s as well, which obviously gets you noticed there at the nationals,” Schulz said, also crediting his time with the Murray Bushrangers in the TAC Cup as being instrumental to his development.

“Those two pathways led to me being noticed and eventually signed up.”

Schulz made his AFL debut for the GWS GIANTS against Richmond in Round 12 of 2012, though a succession of injuries has meant that this remains his only appearance for the AFL side so far.

Forced to undergo a shoulder operation at the conclusion of the 2012 season, he was laid low once again this year by a nasty bout of glandular fever.

Having now recovered from the ailment, Schulz’s strong form for the UWS GIANTS, the club’s reserve side that participates in the NEAFL, has led to a renewed confidence in his own ability.

“I’ve been playing consistent now for about seven weeks or so, the fitness is back and I’m starting to get a few kicks now,” he said.

“I’ve just got to keep playing consistently well and see where it takes me.”

As a member of the GIANTS, Schulz is surrounded by fellow players from the Riverina region.

“It’s really good, it’s helped me coming up here, already knowing a few of the boys,” he said.

“I knew Jacob Townsend, Mark Whiley and Anthony Miles – I’ve been playing with Anthony for about 11 years now.”

Schulz believes that NSW-produced players like him will continue to feature in the AFL’s future.

“It seems like the pathways are just getting stronger and stronger and there are more opportunities for NSW boys,” he said.

When asked to summarise his progress, Schulz kept it short and positive.

“I’m happy with how I’m going and hopefully I’ll get an opportunity soon.”

The USW GIANTS play Eastlake this Saturday at Dairy Farmers Park at 2:00 in an elimination final.