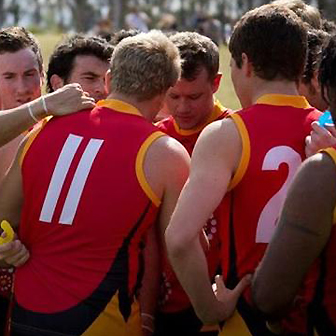 When the newly-formed Blacktown Magic Australian Football Club held its first-ever training session at the beginning of the 2012 season, just five people turned up – four, if you exclude the coach.

Yet by the end of the year, the club’s sole team had 40 registered players and secured a place in the AFL Sydney Division 3 Grand Final, losing gallantly to a strong UTS side.

The club’s immediate success on the field was complemented by an emphasis on establishing a strong off-field culture and in only its second year of existence, the Magic have created history by becoming the first NSW/ACT club to receive the Swisse Quality Club Gold Level accreditation.

“Most players were mates who came to the club with no expectations other than to have a game and to enjoy the camaraderie,” said John Clifford, President of Blacktown Magic, when reflecting on the club’s start.

Many of its players were relatively new to AFL – indeed, of the 22 players who participated in the side’s Grand Final loss, 14 had never played the sport prior to that season.

After their unexpectedly successful first season, the Magic became a popular destination for disillusioned footballers.

“We were swamped with enquiries from players from other clubs,” Clifford said.

“They had heard about our first season success and, importantly, our club ethos and spirit.”

The Magic have previously been awarded both Bronze and Silver Level accreditation in this program, achievements that Clifford believes were made possible by club members Fabian McLeod, Daniel Clifford and Patrick Barclay’s tireless work.

“These three individuals developed and implemented all of the administrative requirements that the AFL required,” Clifford said.

“From setting up the committee, signing on players, chasing sponsors, discussions with the local Council, ordering playing equipment, fundraising and a multitude of other activities, they’ve done everything they can to help out the club.

“It was the efforts of one individual who drove the Quality Club Program to ensure success at its highest level and accreditation at the Gold Level.

“That person was Daniel Clifford, and full credit goes to him for the outcome of this award.”

With a commitment to developing a strong, positive off-field culture, Blacktown Magic is a supporter of the White Ribbon Foundation and its aim of preventing male violence against women.

“We proudly support the values of this organisation, and raise funds where possible to enable its work to be done,” Clifford said.

The Magic have already instituted a Ladies Day, as well as more traditional fundraising activities like meat raffles and movie nights, in the words of Clifford: “All ingredients that are necessary for a successful and sustainable club.”

Blacktown Magic is supported by Blacktown Council, amongst other organisations, and its affiliation with the local community and culture is epitomised by the club’s guernsey – a red, yellow and black design inspired by the local indigenous culture.

As part of its strategic plan to expand and develop as a club, Blacktown Magic would like to establish a partnership with a junior club and continue to grow on and off the field.

“We also want to have a home ground which is reflective of the strength of the club, and to have facilities that will attract players of all standards,” Clifford said.