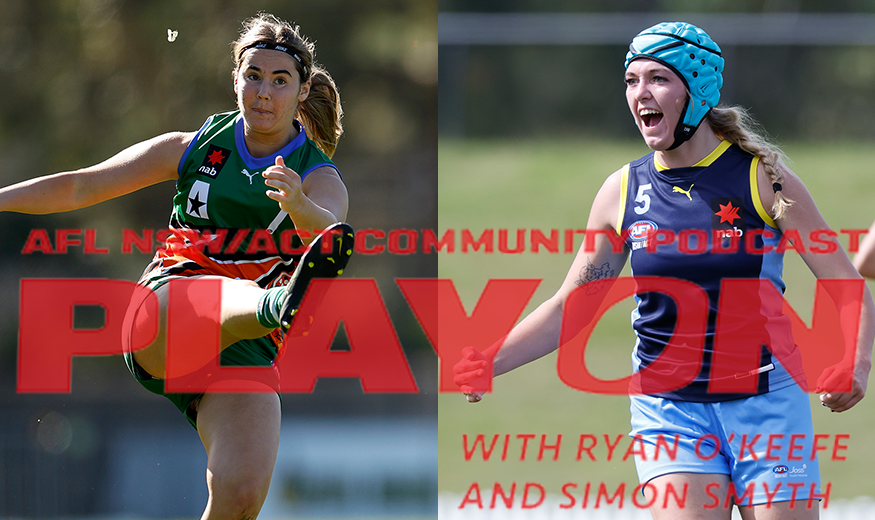 Zarlie Goldsworthy from Lavington Panthers and Cynthia Hamilton of Queanbeyan Tigers (via Belconnen Magpies) have had very different footy journeys.

Zarlie is a multi-sport star. An elite talent in soccer, she only recently came to footy but still dominated the recent National Championships, being named the MVP for the Allies team.

Despite only playing club football for the past two seasons, Zarlie has been around the game a lot, gaining selection at school and representative level during the years when soccer was the first priority.

She told the Play On podcast about her ambitions for elite footy. “Two months ago, it was never really a reality and it’s just skyrocketed since then,” Zarlie said. “AFLW is the next dream so I’ll see where that road takes me. I’m not sure when the draft is but it’s what I’m hoping for next but we’ll see how that goes.”

Prolific contested ball winning midfielder/forward who is a hard-edged beauty. In her three games, one for NSW/ACT and two for the Allies she averaged 15.5 disposals (11 contested) and four tackles per game to win the Allies MVP award. Coming from a soccer background and relatively new to the game she has great natural ball-winning instincts and an innate ability around the goals.

In contrast to Zarlie, Cynthia Hamilton has focused on footy for some time.

She was selected in the All Australian team in 2021 even though she was one of the younger players in the Allies team. This year, she took on a leadership role with the Allies, bolstering her game to the next level, beyond her eye-catching kick.

Cynthia’s selection in the 2022 All Australian side was a pleasant surprise for her given she’d come off an ankle injury into the National Championships. “This year I didn’t perform as well as I thought I could have,” she said. “I was doing three weeks of contact coming into the Allies game so I honestly didn’t think I was going to make it this year, but I’m very very happy that I did.”

Next for Cynthia is an AFLW berth. “My goal is to get drafted – it has been for a very long time,” she said when asked what her goals were with footy.

Which club? All players say it doesn’t matter, but for Cynthia that is the truth. She’s a Swans fan who’s been in the GIANTS Academy system. If her form at age level is any indication, she’ll be a star wherever she ends up.

Highly skilled forward with a sharp competitive edge highlighted by her aggressive tackling and capable in midfield where she excels at stoppages and one-on-one contests. Now a back-to-back All-Australian averaging 19 disposals and six tackles across her three games in the championships, playing one for NSW/ACT and two for the Allies.

You can listen to more of Zarlie Goldsworthy and Cynthia Hamilton on the Play On podcast in the player below, Spotify or Apple Podcasts.