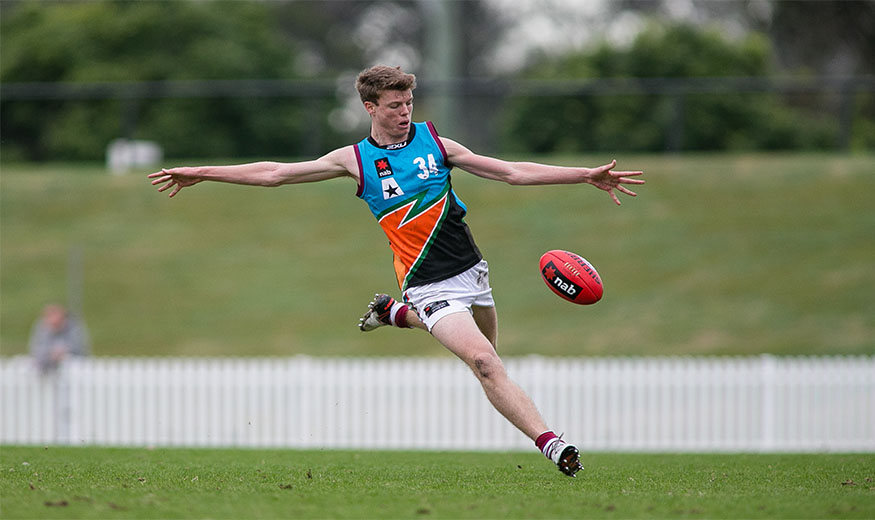 Exciting 2018 draft prospect Nick Blakey has been put on ice, with the versatile utility set to miss the remainder of the 2017 season through injury.

Blakey, the son of North Melbourne and Lions great John Blakey, will be sidelined for the next eight to 10 weeks after suffering a stress fracture in his back.

The 17-year-old represented the Allies in their first three games of the Division 1 Under 18s national championships, but it has been decided in the past week to take a conservative approach with the super-talented Blakey, who has the ability to play in any third of the ground.

Blakey will be one of several key outs for the Allies for their final carnival game against Vic Metro in Geelong on Wednesday, with possible 2017 first-rounder Charlie Spargo to undergo shoulder surgery this week.

The injury setback for Blakey comes just weeks after recovering from a nasty concussion suffered in April while captaining an Under 17s AFL Academy side in New Zealand.

Still, Blakey finds himself in a luxurious position, with four options on the table for the 194cm athlete ahead of the 2018 national draft.

As the son of John — 135 matches for Fitzroy and 224 with the Kangaroos — as well as a member of Sydney’s Academy, Blakey is eligible to be drafted at a discount by either the Kangaroos (father-son), Lions (father-son) or Swans (academy), while he could also opt to go into the open draft.

While there are obvious family ties to both North and Brisbane, Blakey has lived in Sydney while his dad has been an assistant coach at the Swans.

Blakey this season has already proved why he’s considered one of the most promising prospects for the 2018 draft, which is already being dubbed as a potential ‘super draft’.

He was one of the standout players in the Division 2 national carnival earlier this year, averaging a competition-high 135.9 Champion Data ranking points per game. And before hitting his head on the ground against the New Zealand Hawks in Wellington, Blakey had four goals to his name.

Scott, the son of Robert Scott, is eligible to be drafted next year as a father-son selection (North Melbourne or Geelong), an academy pick (Gold Coast Suns) or in the open draft.

Scott will be one of several future prospects on display for the Allies on Wednesday at Simonds Stadium along with Tasmanian Tarryn Thomas, who’s linked with North Melbourne via its next generation academy.

The Allies-Vic Metro clash will be the first of two Under 18s matches in Geelong on Wednesday, with Vic Country and South Australia to close out the 2017 national carnival.

Both matches will be broadcast live on Fox Footy, with the first clash commencing at 2.10pm (AEST).