Sydney teen primed to be a top pick 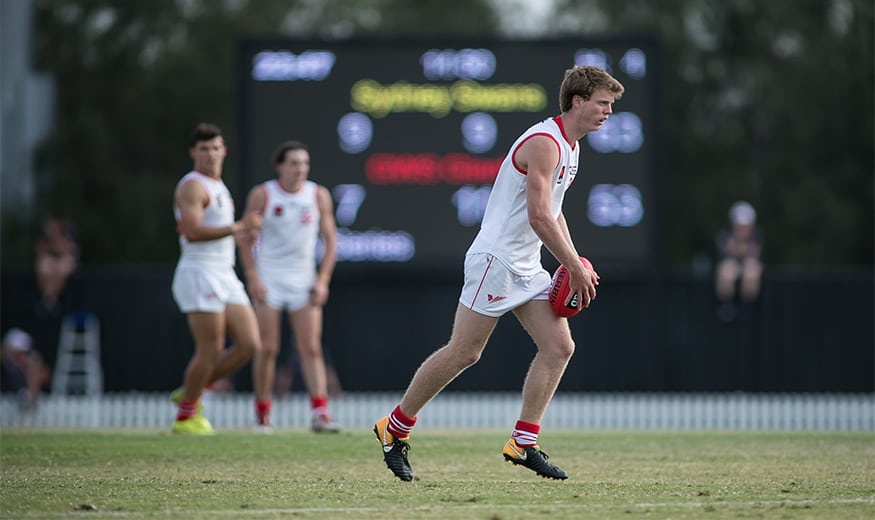 Originally published by the Daily Telegraph.

DOWN near Coogee beach at dusk, usually on a Tuesday, you’ll find an AFL champion and his son kicking for the love of the game.

At Coogee Oval John Blakey, a 359-game, two-time premiership player for North Melbourne, has a weekly kick with his son Nick, one of the brightest AFL hopefuls in the country.

Nick is touted as a near certain first-round AFL draft prospect. There’s a big buzz about the tall, agile, 18-year-old in AFL circles.

But his dad John, a long-time Swans assistant coach has never placed a speck of pressure on him to follow in his footsteps.

“Dad is just big on me making my own name,” Nick said.

“I am not the same footballer as him. I am way taller than him. He was a half-back man and I am a centre half-forward. We are different players but he’s been huge in my development.

“We speak after every game and he tells what I need to improve on and what I have done well – he leaves the coaching purely up to my coaches – but I love it [his advice].”

In recruiting circles Nick has been described as a “freaky player”. “A gun”.

A player who has the ability to produce stunning football; that goal from the boundary line that you wouldn’t think was possible. A footballer who can emerge from the bottom of a messy pack of bodies and sprint away with the ball.

“He’s the type of player that can leave you thinking; ‘how did you just do that?’” One AFL club recruiter said.

State manager of talent for AFL NSW/ACT Darren Denneman says the 196cm forward is “well in tune” with the game.

“He has an ability to actually adapt really well to the role he plays whether that be, midfield, up forward, I could see him playing down back certainly.”

“He’ll go early [in the draft] you’d expect … they are obviously talking about him a lot … from my perspective we want players from AFL NSW/ACT to get onto to AFL lists and it doesn’t matter if they go No.1 or 101.”

Nick has a terrific athletic ability. As a kid he would just “rock up and run” at state athletics championships and dominate the middle distance races.

When he was 12 he went to a national athletics championships to run the 800 metres, and on the back of little training and no coach, he placed second.

Soon he found running a bit boring without a footy in his hand.

So he worked hard, inspired by his dad, for an AFL career.

Nick spent countless hours training and playing to be his best. Hours practising dribble kicks. Hours nailing quick snaps at goal to long 50 metre goals on the run. He says his hard training dad is a “role model” when it comes to his preparation.

“He got the best out of his body when he played and had a very long and successful career,” Nick said.

And while it is his dad who has shaped him as a footballer Nick says it is his mum who deserves credit for teaching him how to kick as a little kid.

“Early on Mum was the one that got me to the park and have some fun with the footy.”

Because of John’s stellar career at North (224 games) and time at Fitzroy (135 games), Nick was eligible to be taken as a father-son selection by both the Kangaroos and Brisbane Lions, instead he has nominated the Swans as his preferred club for 2019.

He was eligible to do this after spending his junior years in the Swans Academy.

Nick said his time at the Swans Academy and NSW/ACT Rams has been “huge” influence on his career.

Blakey will represent the Allies in the 2018 AFL under-18 championships with the first game to be played at Spotless Stadium on Saturday, June 9.

While Nick’s heart is in Sydney – and whether he plays for the Swans will depend on how the cards fall on draft day – his greatest hope is to just play AFL.

“If I got the chance to play at the Swans that would be my preference but anything can happen on draft night – if I was drafted to any club I would be happy,” Blakey said.

“It wasn’t that hard of a decision [nominating the Swans], obviously seeing what dad did and winning a few premiership there at North Melbourne, but Sydney is home, I am mates with a lot of other boys here, if I could stay here that would be great but if not, that’s football, I will play for whoever.”