Needle in a Hay stack 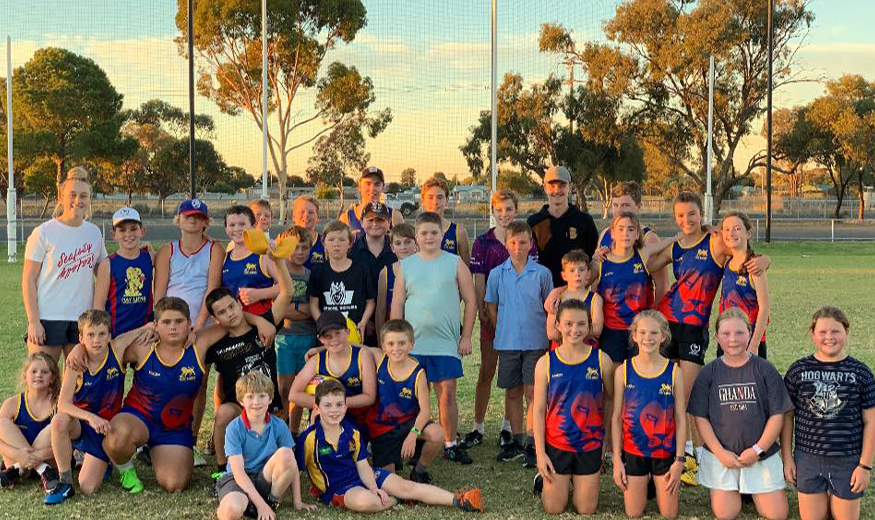 One of the best things about footy is the people and their stories. They colour our game and bring scores, stats and data to life.

Hannah Stewart, has plenty of stories to tell, each one painting a picture of talent and commitment to the sport and her club, the Hay Lions.

Just 20 year old, her footy journey is full of fun and success as a player and a coach.

There are countless women and men like Hannah who are mentors and inspirations for their community. If you know any, consider nominating them for the BHP Community Coach of the Year Award or the AFLW Community Ambassador program.

Getting into it early

Stewart started as so many do, having a bit of fun with her friends at Auskick. When she was eight she played her first game and fell in love with the Sherrin, despite it being a little out of reach for her.

“I don’t think I touched the ball once, but I was like ‘I love it!’ even though I didn’t touch the ball,” she said.

Not getting a possession in your first game is almost a rite of passage for new players, but for Stewart just getting on the field is something to admire. She was eight years old, playing in the U14 boys’ side.

“There’s quite a big group of girls who play in Hay. It wasn’t really abnormal for a girl to be playing football,” she said. “We’ve had so many generations come before us play as well, so it’s quite common.”

Football lineage is something Stewart knows a lot about. Her father played more than 300 games for Hay alongside his three brothers. The Stewart name is synonymous with footy in the region and Hannah has heightened its reputation.

After that first taste an eight-year-old, Stewart steadily moved up through the U14 division at Hay, eventually co-captaining its premiership side when she was top age.

Along the way, she represented the Riverina as a 13-year-old in the U16s, played in the U16 NSW/ACT Rams side alongside her older sister (she was 14) and was named in the All Australian squad the following year.

“I had a goal to make the All Australian side,” she said reflecting on her representative side appearances. “So I put my head down and gave it everything to be selected when I was 15.

“And then after that, it was quite weird, I’d achieved everything I was aiming for, so I didn’t really see the need to keep playing anymore.”

Stewart had a year away from footy, fatigued by the hustle and bustle of long drives and the new found professional environment that the lure of AFLW brought with it. She enjoying a renewed netball focus.

But the passion never went away and upon returning to the footy field the next season, Stewart found herself playing for the Rams and the Allies against the best talent in Australia.

The first female coach in the Golden Rivers league

In 2019, Stewart took charge of the side she’d captained to a premiership three years earlier, coaching the U14s Hay Lions.

This made her the first coach of any side in the Golden Rivers league’s 100-year history, and also one of its youngest.

“I feel like, in a small country town, a male’s way of coaching is so different to how I would coach,” she said. “Not in a bad way, but they can get quite caught up in the competition and get angry, whereas I do not get angry at all.”

About coaching, Stewart says: “I love every second of it. They’re such a good group of kids in Hay and I wouldn’t change anything.

“I thought maybe being a girl and the first female coach in the league might be a bit of a challenge for others, it didn’t really bother me, but everyone was so welcoming, they couldn’t have accepted me more.” A story for the grandkids

Stewart’s talent and passion for footy in obvious. She is also as tough as nails.

Let’s set the scene here: 14-year-old Stewart is captaining the U14 Hay Lions side she had played in for the better part of six years. It’s the semi-final and the winner has a week off before the grand final – the Lions were in the box seat.

Then “this really big, developed male came through and tackled me, and flung me to the ground.” It broke Stewart’s collarbone.

On the bench after the injury, Stewart’s first thought was, “do I get to play the grand final?” before bursting into tears, “not because of the pain or anything, I was devastated to miss the grand final.” A trip to Swan Hill hospital confirmed what everyone knew.

Undeterred by the injury and the fact that she was the “captain and just football mad,” Stewart had her guernsey altered by cutting it down the side and adding velco. This let her slip it on with minimal pain or damage to the injury.

“Sitting on the sideline on grand final day, I was just going crazy,” said Stewart. She came on with five minutes to go in the fourth quarter and had a kick just before the siren sounded and she and her team mates were covered in glory.

Now coaching the U14s, would Stewart endorse such behaviour? “Top age, grand final? I’d send them on,” she said without hesitation.

As a player in Hay, toughness comes with the territory. “Hay was always known to have good tough girls,” Stewart said. “Ahead of its time, really.”

Hannah Stewart now plays for Kerang’s women’s after being asked to play by its coach. We hope she’s around a long time and can continue to be a role model for young footballers right around the country.

AFL NSW/ACT is heading on a road trip…digitally! Look out for us in a town near you.