NEAFL R15 Round Up – Uni bounce back 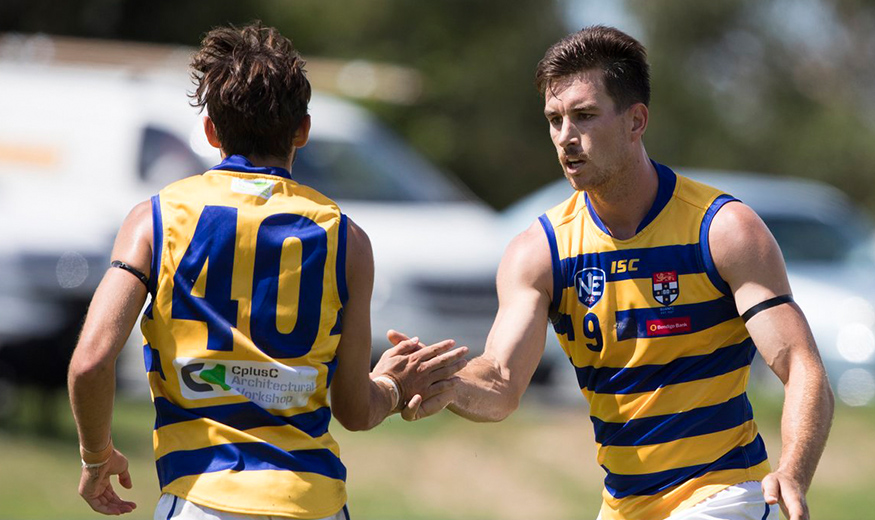 The GWS GIANTS were on the end of a Hamish Shepheard masterclass on Saturday, as he kicked nine-goals to help the Sharks to a 70-point victory.

The GIANTS played only four AFL-listed players and their lack of experience showed as the Sharks outplayed them across the park.

Southport applied pressure early, kicking eight goals to two in the first half. They kicked the first four goals of the match and never looked back, staying in front until the final siren.

The GIANTS were simply not able to get enough of the ball throughout the match to make an impact on the scoreboard. The Sharks collected 181 more disposals than the GIANTS and they continually managed to turn this into points on the board.

The Sharks were also the stronger team in the air, taking 131 marks to the GIANTS’ 49. After coming so close against the Thunder last week, it was a disappointing result for the GIANTS who once again finish the round on the bottom of the ladder.

Despite the scoreline, there were some impressive performances from the GIANTS side. GWS GIANTS Academy member, Reed Stevens was the best for his side, picking up 20 disposals to go with ten clearances and a goal.

Dawson Simpson continued his dominant ruck form, collecting 55 hit-outs and one of the few GIANTS players to win their match-up on the day.

GWS GIANTS Academy member, Rhys Pollock was the only multiple goal-kicker for the GIANTS, managing to get on the board twice.

Next weekend sees the Sydney Derby come to Spotless Stadium as the GIANTS host the Sydney Swans. With only six rounds to go, the GIANTS will want to use these final matches as a chance to give their Academy players a run and to put in some promising performances ahead of next season.

The Sydney Swans have sent another strong message to their rivals, dismantling the Gold Coast Suns by 107 points.

Led by Callum Sinclair and Aliir Aliir, the Swans continued their strong form leading into the finals. Their strong defensive structure limited the Suns to only the one goal in every quarter, whilst they managed to kick away.

The Swans kicked ten goals in the first half to lead by 47 at the main break.

Following half-time, the Swans did not let up as their relentless pressure saw 11 goals kicked in the second half to secure a massive win.

Sydney’s disposal efficiency was a real highlight, winning 138 more disposals than the Suns. Even more impressive was their defensive pressure, making 74 tackles led by Sinclair with nine.

Sinclair was arguably Sydney’s best on the day, kicking five goals and 20 disposals to go with his impressive tackling display.

He was assisted by Jeremy Laidler (32 disposals, 11 marks) and Colin O’Riordan (31 disposals, 10 marks) who were too good for the Suns across the half-back line. Their combined 11 rebound-50s was key to the Swans victory.

James Rose and Brandon Jack continued their goal scoring form, kicking four and three goals respectively. Emergency, Harrison Carr, made the most of his call-up opportunity, with the Swans Academy member kicking four goals in a promising display.

The top of the table Swans are set to continue their good form, facing the luckless GIANTS at Spotless Stadium this weekend. They play in the curtain-raiser to Sydney Derby XIII as they look to continue their strong form close to the finals.

A fast-starting Sydney University proved too good for the Canberra Demons, claiming a 101-point victory at Blacktown International Sportspark.

The Students kept the Demons scoreless in the first quarter. They kicked five goals in the process to open up a 36 point lead at the first break. The lead only got larger from there as Sydney University were relentless around the ground, keeping Canberra’s dangerous midfield quiet.

It was a consummate performance from the Students, who were celebrating Tim Barton’s 100th NEAFL match. A usual defender, Barton was even able to manage a goal to go with 21 disposals in his milestone game.

Sydney Uni’s contested ball and work around the stoppages proved too good for the Demons. They were simply unable to keep up with the likes of Tom Young (35 disposals) and Zac O’Brien (34 disposals) who dominated in the midfield.

Jacob Derickx and Matt Wilson both kicked four goals for Sydney University in an impressive display up front.

Inaccurate kicking was the only problem for the Students, kicking 25 behinds for the match. With percentage so important for teams heading into the finals, goal kicking will surely be addressed by their coaches.

Despite being outplayed, the Demons can certainly take some positives away from the match. Cameron Milne had a good game in the ruck, as Canberra won the Hit-Outs 38-29.

Jordan Harper was a standout, his 29 disposals a highlight for the Demons on what was otherwise a dour day.

It was an important result for the Students who had lost two weeks in a row prior to this match. They now have the bye before they host the GIANTS at Blacktown in two weeks’ time.

The Demons will be hoping to get their finals push back on track next week when they host the Sharks. They currently sit two wins outside the top-six and will have to be faultless to make the finals from here.

Connecting with culture on Leadership Camp