Nadene McBride: Being good mates and having the time of your life 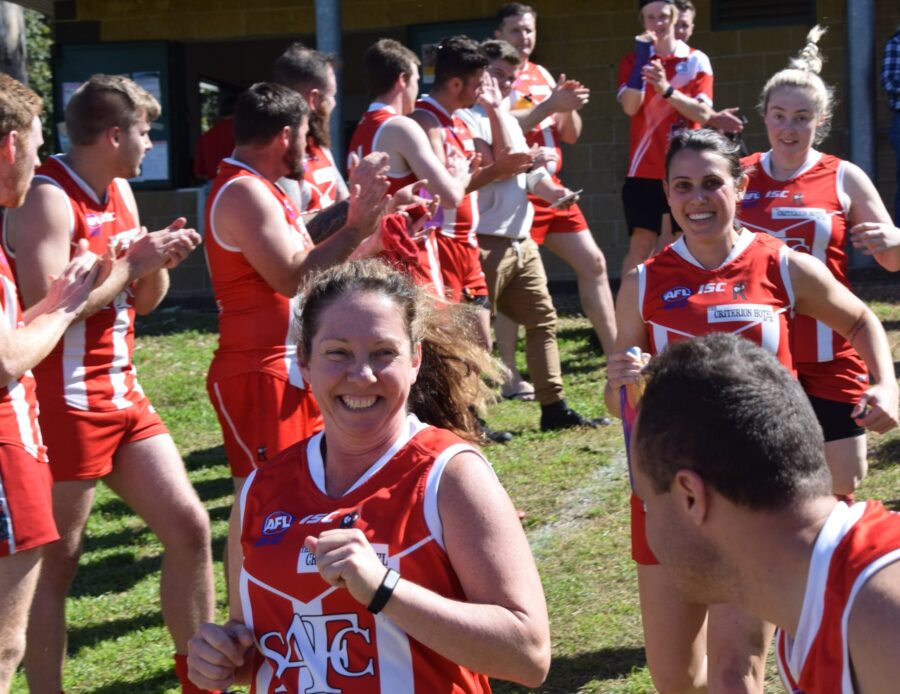 Like so many, Nadene McBride proudly says she “lives and breathes footy”, but unlike so many of us, she puts her words into action at her club, Singleton Roosters.

Nadene is the playing coach of the senior women’s side and the president of the club. She was involved in creating the women’s program, captained the side in its inaugural year (2017), kicked its first goal and became coach in Round 3 2019, following the abrupt exit of the team’s sixth coach in three seasons.

“Coaching is the one thing I definitely didn’t want to do,” Nadene said with a straight face. “But I love it now.”

Growing up in South Australia, football is just part of life for Nadene. But that’s not the case for many of her teammates, some of which had never touched a Sherrin before coming to training. “I thought I wouldn’t have the time to work with every single girl and get her to play better or make her feel like she’s part of the team,” she said.

Balancing coaching duties with presidential ones is not an easy task, it takes time, administrative nous, football smarts and emotional intelligence. One of the traits that endears Nadene to her team, club and community is her passion and care for everyone in the club environment. She also has boundless energy and lifts spirits of those around her.

“I’m a massive mum,” she said when talking about team morale. “I just want every body to be okay and I don’t think that’s been previously considered. It was just about us kicking the ball and playing.”

This attitude has clearly helped the team gel and be successful. After “absolutely getting flogged” in the first three years, Nadene’s chargers won the premiership in 2020 – her first full season as coach. Following that, the team lost 16 players, proving how tough it is to maintain players at Singleton, even in times of great success. To recoup the losses, Nadene recruited 14 players for the 2021 season – none of them had played AFL before, six of them are mums of U15 players. Nadene’s infectious energy rubs off on everyone at the club.

At the COVID pause in 2021, Nadene’s Singleton Senior Women are 7-2, sitting second on the ladder in the Black Diamond Plate. It’s an incredible return to the top of the ladder after such a significant player attrition rate in 2019.

Nadene credits her coaching success to the people around her, be it the players or her assistant coaches over the journey, one of which “didn’t know AFL from squat, but he loves it now”.

Her philosophy is one that could breed positive, winning cultures in a lot of environments: “I knew we’d have to work hard to keep these girls, because no one wants to come along and get absolutely flogged. I gave people realistic views and said this isn’t about us winning, it’s about us being good mates and getting along and having the time of your life. And from that, good things happen.”

All the best to Nadene and her Roosters in their premiership defence in 2021.