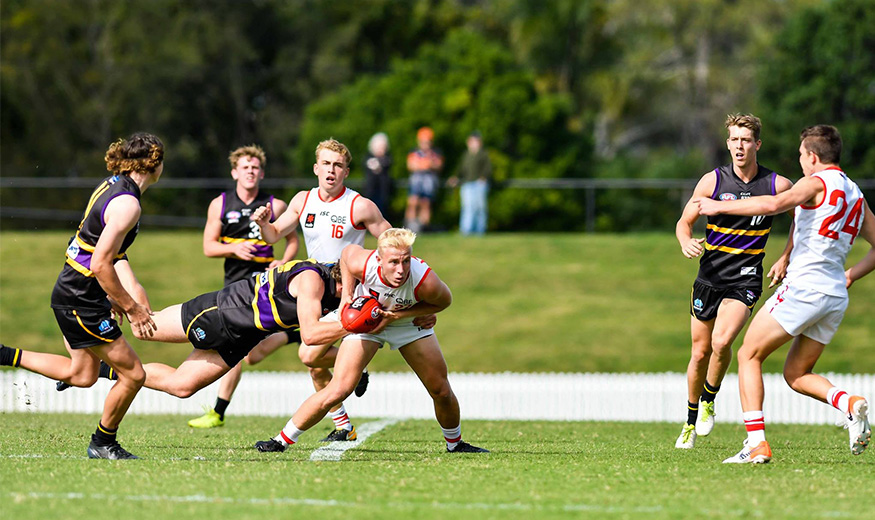 It was back to Blacktown this week for the Sydney Swans and GIANTS Academies competing in a double-header on Saturday.

A win for the Swans against Victorian side, the Murray Bushrangers, left them as the only team in the competition yet to drop a ladder point – the Dandenong Stingrays also remain undefeated, however, drew with the Geelong Falcons in Round 3.

It was all the home side’s way from the get-go with a commanding five goals kicked by the Swans in the first quarter, whilst their opponent remained goalless. Hamish Ellem returned from his match-winning performance in the NEAFL last week, scoring his first of three for the day in the opening term.

The Bushrangers started to find their way in the third term but by that point, the finish line was already within sight for the Swans.

Lachlan Swaney won best on ground for the Swans after notching season-highs of five marks and 18 disposals.

Three goals from Hamish Ellem gave his side the edge over their Victorian competitors. Thomas Drum also contributed well to the Swans’ scoreline, adding two goals in his first hit-out of the NAB League.

Callum Nash and Aidan Watling were also key in the Swans’ victory.

The GIANTS were unable to replicate last week’s maiden NAB League winning performance, defeated by the Gippsland Power despite the game going down to the wire.

The home side struggled to keep pace with the visitors in the first quarter, heading into the first break at a 13-point deficit. The Power continued to kick away from the GIANTS in the second, adding to their lead of 22 points at half-time.

Whatever Jason Saddington said to the GIANTS in the sheds during the break, clearly spurred on his chargers. The home side kicked four goals and held the Power to one goal, seeing them go into the final quarter just one-point behind.

There would be only one-goal scored in the last quarter, and unfortunately for the GIANTS, it would be at Gippsland’s end of the ground, seeing them leave Blacktown as nine-point victors.

Harry Grant’s performance earned him best on ground for the GIANTS as he recorded one of his best outings in 2019, with two goals and 30 disposals.

Nicholas Murray also played gallantly for the home team, racking up a game-high of nine marks.

Liam Delahunty continued to compete for top goalscorer of the competition with his two goals placing him tied for third place.

Both the Swans and GIANTS will play their final matches of the NAB League next week against the Geelong Falcons and Murray Bushrangers respectively.