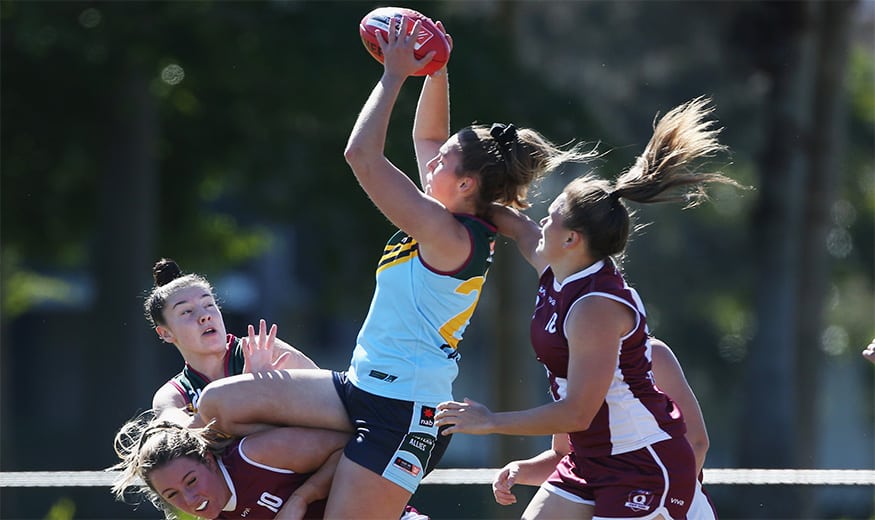 AFL NSW/ACT will have three representatives at the 2018 NAB AFL Women’s Draft Combine to be held at Etihad Stadium in Melbourne on Tuesday, October 2 and Wednesday, October 3.

Holbrook’s Alyce Parker, Canberra’s Alexia Hamilton and Clarence Valley’s Brianna McFarlane have all been nominated by AFLW clubs to attend following the recent NAB AFL Women’s Under-18 Championships on the Gold Coast.

The news comes after stellar performances from the three players for the Eastern Allies a few weeks back, where all three were named in the 2018 NAB AFL Women’s Under-18s All Australian side.

Parker’s AFL NSW/ACT MVP Award received in June was followed up with the Eastern Allies MVP Award during the Championships, where she also Co-Captained the team.

Hamilton’s Championships proved an eye-opener for some, with her versatility across the ground – forward, middle and back – shown off in two best on ground performances out of three matches.

After a successful series against Tasmania, McFarlane continued her good form on the Gold Coast, named in the Eastern Allies bests for her match against the Central Allies, where she also kicked a long-range goal. While McFarlane missed the next two matches of the Championships, clubs obviously liked what they saw in her first match of the Championships.

Thurgoona Bulldog, Parker found out about her invitation two days ago when AFL Female Football Talent Manager, Aasta O’Connor gave her a ring.

“I had a call from Aasta on Tuesday, formally inviting me to the Combine,” said Parker.

“She said that I had been working hard for last six months and with the AFLW Academy, and it was all reward for effort, which was really nice to hear.”

Parker says she is not only excited for herself to attend after years of hard work, but also for her Eastern Allies teammates, Hamilton and McFarlane who she can’t wait to see in Melbourne.

“I actually saw Lexi yesterday and we didn’t realise that both of us had received the call up until today. I’m so excited for the girls. I’ve been playing with Lexi now for over three years, so I love seeing a close friend of mine find the success she deserves – she’s a great footballer.

“Bri’s performance at Blacktown in June and then again on the Gold Coast was of such great quality, and obviously enough to show clubs that she has what it takes. I’m really happy for both of them.”

“Lexi is deserved of her chance to attend the Combine after a very consistent performance at the national Championships,” says Moeller.

“Her overhead marking and composure with the footy stood out. I look forward to seeing Lexi perform well in the clean hands and skill testing.

“Parks had a magnificent national Championships, being named the AFL NSW/ACT MVP for the second consecutive year.  Her work ethic and ball winning ability combined with her strong leadership qualities make her one of the top prospects of this year’s Draft.  I have no doubt, Alyce will perform very strongly in the endurance tests and skill tests.

“Brianna is an athletically gifted player who stood out at the national Championships with her ability to consistently find the footy on a wing.  At 176cm she is a likely prospect and can play as a tall or small. I have a feeling Bri will perform very strongly in the vertical leap test.”