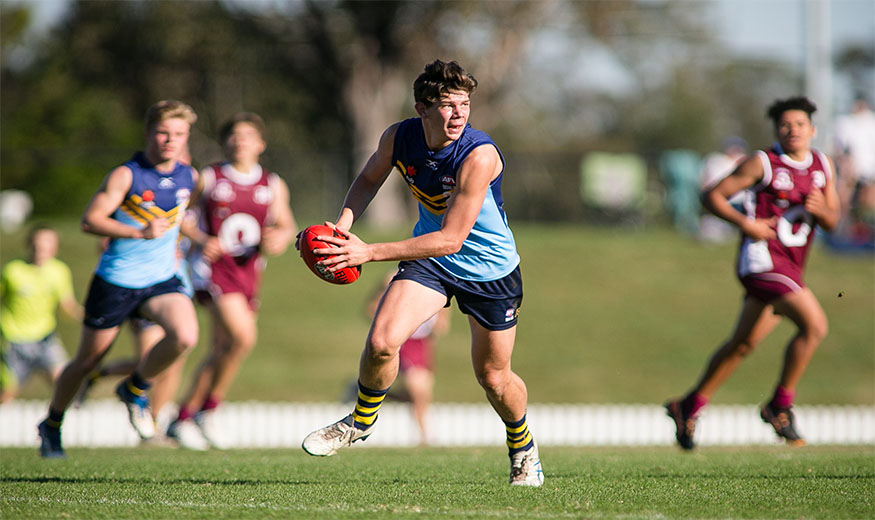 The AFL has today released the twenty-first intake into Level One of the NAB AFL Academy.

Included in the selections are AFL NSW/ACT Rams, Josh Rayner of the Sydney Swans Academy and Liam Delahunty from the GWS GIANTS Academy.

Rayner and Delahunty were impressive during the 2017 NAB AFL Under 16 Championships, with both frequently listed among the best players for the Rams throughout the series.

It has been a big week for Rayner having been announced as a joint winner of the 2017 Kieren Jack Medal for the Best and Fairest Boys player within the AFL Sydney Juniors competition.

The 22 players selected will receive a NAB AFL Academy scholarship and under the guidance of AFL National Academy Head Coach Luke Power, will come together for accelerated AFL football and personal development camps to be held in Australia and overseas over the next 12 months.

Today’s Level One intake was selected from the NAB AFL Under 16 Championships, which recently concluded in Queensland, with players aspiring towards the 2019 NAB AFL Draft.

Over two decades, the NAB AFL Academy has produced:

“The NAB AFL Academy has also given our best young players the opportunity to play for their country against a variety of opponents,” he said.

“The Academy’s motto is to develop better people and better players. The coaches and mentors involved in the Academy over the two decades have helped shape our future players into becoming stars of the game and great leaders who can succeed on and off the field.

“This is a truly national program that continues to go from strength to strength.

“In addition to the NAB AFL Academy (Level One) group the AFL has introduced a new development list to meet the needs of the AFL industry comprising of  taller players aiming to play in the ruck or key positions in the AFL. Eight players have been include in this category.

“All 30 players will attend their first camp in Melbourne in December 2017 where they will receive specialised coaching and personal mentoring aimed at accelerating their development as young people and footballers.”

National Australia Bank’s General Manager Brand and Products Marketing, Michael Nearhos spoke of NAB’s ongoing support of the talent pathway and the important role that the NAB AFL Academy plays in fostering the future of football.

“NAB has partnered with the AFL for well over a decade.  During this time we’ve seen the NAB AFL Rising Stars Program shape and support some of the country’s most outstanding young footballers. We’re thrilled that through our support of this program and the NAB AFL Academy in particular, we can continue to play a genuine role in growing the game,” said Mr Nearhos.

“In its 20 years, we have seen many superstars get their start in the NAB AFL Academy.  We look forward to hearing the announcement of the Level Two squad later in the year. We congratulate all the young players who will take part in this year’s Level One program and look forward to watching their careers develop,” he continued.

The NAB AFL Academy is part of the Rising Star Program, which supports grassroots players and football communities and helps young Australians fulfil their dream of playing in the AFL. The NAB AFL Rising Stars Program comprises the following elements:

NAB has been supporting footy from grassroots to the elite level since 2002.