Myers fit and firing ahead of AFL Draft Combine 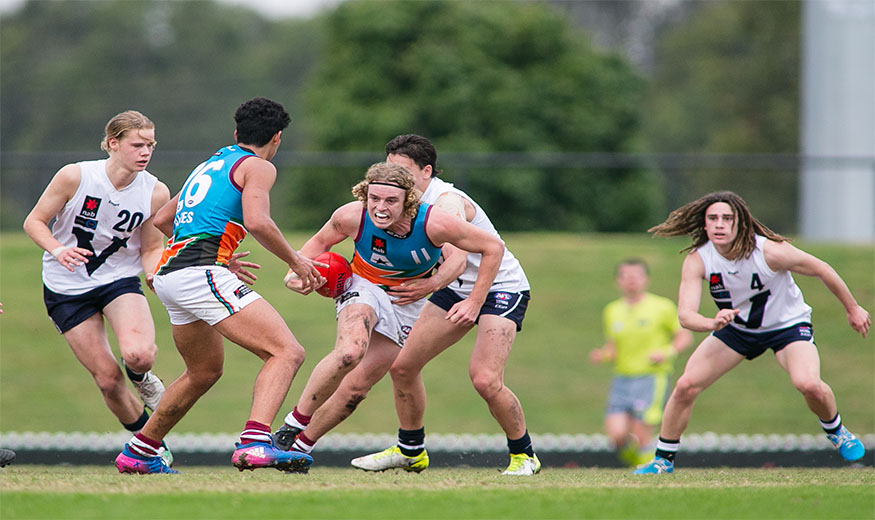 At a time of year where footballers, from local to the elite, are starting to loosen the screws and relax, Wagga Wagga’s Brendan Myers is doing anything but.

Selected as one of the five AFL NSW/ACT players to attend the 2017 NAB AFL Draft Combine next month, Myers is now refining his game and ramping up for one of Australian Football’s biggest tests.

But as the best laid plans can often go awry, Myers is the first to admit that his season with the Allies did not go quite as planned.

“Overall, it [the Championships] probably did not go how I wanted it to,” explains Myers.

“The first two games weren’t the best. The first one was okay, but the second was pretty ordinary, so I got dropped for the third one, then brought back in after I played the NT Thunder in the NEAFL.”

“They said I hadn’t been playing my role as well as they would have liked.

“They do give you advice. It was Tadhg [Kennelly], he just said to me to go back to the NEAFL and try and play as best as I can to make it back for the last game.”

It was Myers’ explosive performance for the GWS GIANTS in the NEAFL, which not only earned himself another chance with the Allies, but also the NEAFL’s Round 14 Rising Star nomination.

“That was pretty special, I didn’t expect it, but I think it reflected my performance – I worked really hard for it. The ball bounced my way a bit I reckon, but I’ll take it.”

It is this humble attitude which also helped Myers reclaim his place in the Allies. Taking his omission on the chin, Myers said he knew in that moment he had to make a change.

“Being dropped from the Allies team sparked something within me, and I thought to myself, ‘Jeez, I better get myself together here, and have a red-hot crack’.”

“Getting that mindset right, I think that brought me back into more form. Then I was able to take that form into the final Allies game, where I think I played my best game of the whole carnival.”

Despite a lean season by the Allies, their final match saw them overcome eventual 2017 NAB AFL Under 18 Champions, Victoria Metro.

“We didn’t win a game all series so we went in thinking, ‘We’ve got nothing to lose here’. We had a relaxed warm up, and then we just went out and threw the kitchen sink at them, and obviously got over the line.

“It was unbelievable. It was so good to beat Vic Metro.”

After finishing the Championships on an high, Myers returned to the GIANTS NEAFL squad, and then took part in the much publicised ‘scratch-match’ between the GIANTS and Adelaide Crows Reserves sides two weeks ago.

Famously, veteran GIANT Steve Johnson also played in this match in an effort to make his way into the senior side to play West Coast in the AFL Semi-Final.

“It was pretty cool – I reckon he gave me one handball. It was exciting to play with one of the AFL’s greats. Griff [Ryan Griffen] was playing as well, so to have them both down there was cool.”

With the competitive season over, it is now up to Myers to ready himself for the Draft Combine. He earned himself a slight break – ‘all but a week off’ – but is now turning his attention to the finer details of the game.

“I had a bit of a break, but I’ve started to knuckle back down.

“I’ve been going to the gym, and have done fair bit of running, getting my fitness up there. Then a lot of touch work, kicking the footy around, practicing shots on goal down at Robbo [Robertson Oval].”

While Myers’ brother, Lachlan and his Wagga based GIANTS Academy Coach, Pat Noonan are aiding him in the lead up to the Combine, he says that at this point of the journey, self-motivation is the key – an attribute Myers has proven to hold plenty of.

The former Wagga Tiger will be entering the Draft Combine at peak health. Despite a minor hamstring injury endured earlier in the year at local football level, he says he will be bringing everything to the table in the first week of October.

Having played across the park during the Allies’ season – ‘I played the first game in the middle, the second game up forward, and last game down back’ – Myers says he can provide options to selectors, and will play wherever he is required.

Influential at the stoppage and strong overhead, Myers says it will be his foot skills which will impress those in the know – a test that will certainly be tried during the Combine, with kicking amongst many checking points throughout the trials.

Allies Assistant Coach,  Tadhg Kennelly says that Myers also has the football smarts to take him a long way.

“Brendy is a very smart footballer with elite awareness, and is a really good decision maker with ball in hand – can go left or right,” says Kennelly.

“He is a versatile player that can play inside and win the hard ball, or outside and use his decision making and high skill level.

“He is a great competitor who has had a really strong back end to the year in the NEAFL, after playing a few games for the Allies in Division One at the Under 18 Championships – there are some exciting months ahead for Brendy.”

As for the type of personality any potential club would be selecting – a self-confessed larrikin.

“I’m a bit of a larrikin, but when the times get serious, I knuckle down and take everything on board. When it’s time to be serious, I am serious.”

A personality reflective of his friendship with fellow AFL NSW/ACT Talent Pathway alumnus and now GWS GIANT, Harry Perryman who has himself been through the Combine process.

“I spoke to Pez [Perryman] a little bit. He said to embrace it all and not to overthink it, and to just have fun with it. So, that’s definitely something I will try to do.”

Brendan Myers will join 82 players from around Australia at the 2017 NAB AFL Draft Combine on 3-6 October 2017 at Etihad Stadium in Melbourne. Stay tuned to the AFL NSW/ACT website and social media platforms to keep track of his progress throughout.