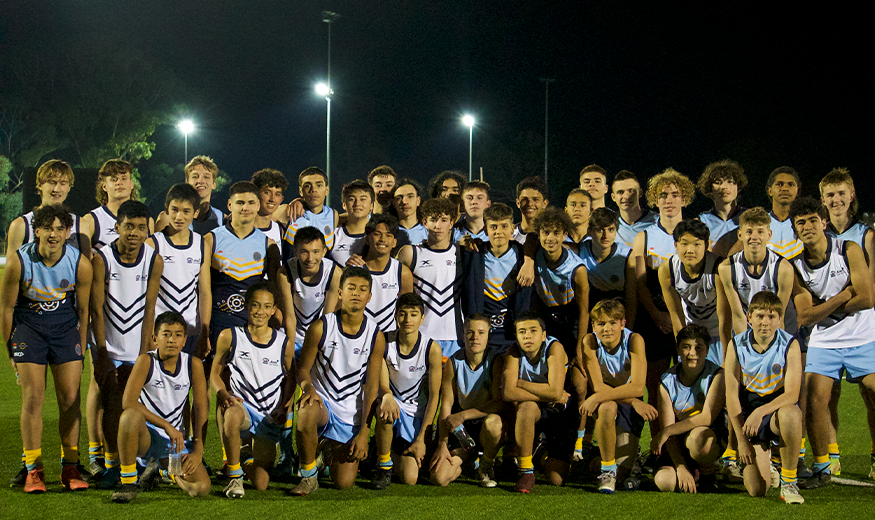 Participants were tested physically and mentally in sessions on leadership, cultural awareness and road safety.

The young athletes, aged 13-16, were selected for the program for their physical attributes and footy skills, as well as their leadership potential. They came from all over our region including Coffs Harbour, Broken Hill, Albury, Canberra, Newcastle, Wollongong and Sydney.

One of the highlights was the First Nations Cup, where players could show their skills and tenacity in a match environment. The multicultural team, All Nations, played off against the Indigenous team, Kickstart, at Lionel Watts Reserve in Frenchs Forrest, with the best players set for selection in national representative teams the World Team and the Flying Boomerangs.

All Nations raced out of the blocks, with the first two goals of the match thanks largely to Alex Makey’s strong marking and the team’s captain, Max Cracknell’s, contested play and clearance winning ability.

However, Kickstart settled in the back third of the quarter, retaining possession to give the side a chance to reassess the state of the game. Jimarn Williamson and Maliyan Blair were dominating the wings, with their carry and disposal an asset for Kickstart.

Oscar Wichman – Tough in the midfield.

All Nations changed its game style at the start of the term, opting to control the ball more than in the first quarter, while Kickstart increased its tempo and tried to make its game style less predictable.

These different approaches meant stoppage and clearance work became crucial, with All Nations establishing control at the contest. Its ruck, Ty Shepherd, was instrumental in giving his midfielders first use.

Dylan Jones – The ball magnet was majestic in the second quarter, delivering well to him team mates.

Ty Shepherd – Dominant in the ruck in a quarter that included a lot of stoppages.

Dainen Welsh – Had plenty to do across half back and managed a few brilliant intercept marks to keep Kickstart in the game.

Cody Spencer – Hard running and quality disposals meant the World Team had to work hard to keep him contained.

Cam Masters – Proved to be a ball-winning bull at the contest and managed some quality clearances.

All Nations continued its dominance after the break, with Alex Makey its key forward. If Makey didn’t take a mark, Airish Mistry and Isaac Luke were ready to mop up.

Although they worked hard, Kickstart fell behind due to the opposition’s stellar ball movement and precision kicking. All Nations’ forwards were on the end of some brilliant midfield play.

One highlight for Kickstart was a remarkable goal from Cody Spencer, which salvaged some pride and gave the Indigenous side a sniff heading into the final change.

Alex Makey – Continued to be the dominant presence up forward.

Matt Ronan – Played in harmony with Makey as another marking target in the forward line.

Cody Spencer – On top of his miracle goal, Spencer was one of the hardest working players on the ground.

Tom Wichman – Continued to battle hard in defence against a rapid moving All Nations.

James O’Loughlin – Worked hard all day and as the game got tougher, he hit the contest harder.

James O’Loughlin bounced out of the blocks for Kickstart, lifting the team’s intensity and bringing them into the contest. Game on.

In response All Nations slowed the pace of the match and finessed the ball around half forward to generate clever and devastating inside 50s. Ty Shepherd was again instrumental as the dominant ruck on the field. His deft taps to his midfielders proved effective, especially to Dylan Jones – an iconic duo was born.

Kickstart’s speedster, Jimarn Williamson, was moved into the midfield, but it was too little too late to impact the score for the team and the World Team recorded a comfortable win.

Ty Shepherd – His domination in the ruck made his one of the most valuable players on the ground.

Dylan Jones – Ability to read the play at stoppages and sweep through the contest was impressive.

Support from Transport for NSW

Transport for NSW is an invaluable supporter of AFL NSW/ACT’s Indigenous Youth Leadership Programs for Aboriginal and Torres Strait Islander youth since 2014.

Through the programs, Transport for NSW has imparted wisdom onto dozens of our young leaders about the importance of road safety and developing leadership in their community by reinforcing road safety messages to help our state move Towards Zero road fatalities by 2056.

Thank you for Transport for NSW’s ongoing support of our young and talented leaders.