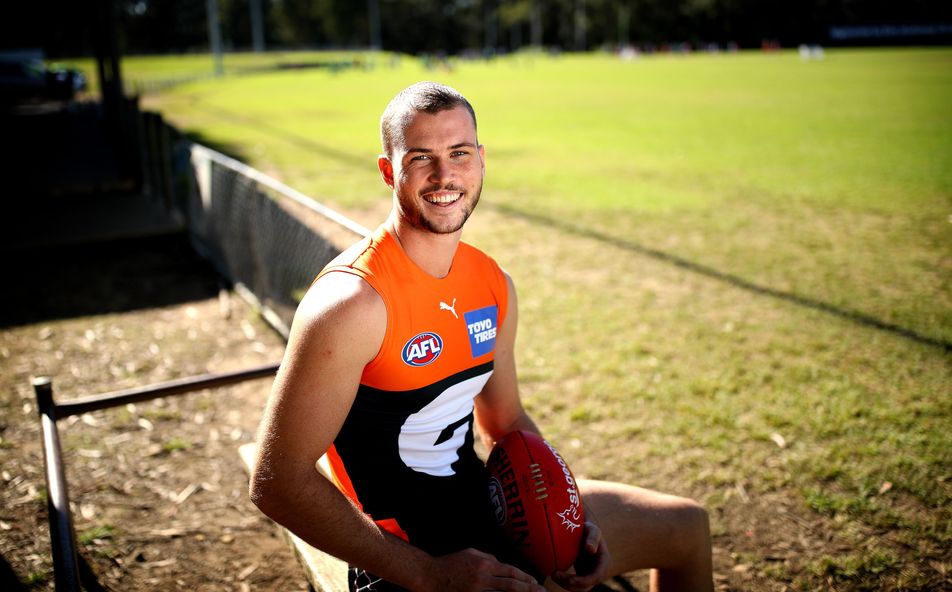 21-year-old Kieren Briggs will complete his transition from Pennant Hills Juniors, Pennant Hills Seniors and the GIANTS Academy to become a fully-fledged GIANT, when he makes his AFL debut on Saturday night against the Richmond Tigers at Marvel Stadium in Melbourne.

The third-year ruckman grew up in Carlingford in Sydney’s north-west and supported the GIANTS since their inception into the AFL.

His  journey began as many others’ does, almost falling into the  support he would eventually play at the elite level. Briggs was asked to help fill-in for a friend’s team at the Pennant Hills Demons Junior Club and the burly tall – who also played soccer, rugby league and rugby union – was an instant star. He was quickly identified as a talent and snapped up by the GIANTS’ Western Sydney Academy from the age of 13.

“It probably started back at Pennant Hills as a kid in the under-12s. I just sort of kept playing footy from there,” Briggs said. “I played soccer and footy together for a while but I think footy was my path and that’s what I wanted to do.”

After winning the AFL Sydney Premier Division Grand Final for Pennant Hills in 2017, Briggs’ star was beginning to rise. His craft was developing nicely at the Demons (Juniors and Seniors) and GIANTS Academy and after graduating high school Briggs spent the 2018 season working at Coles, playing for the Eastern Allies and spending a couple of days a week at Pennant Hills.

By the end of a stellar 2018 he rocketed into draft calculations and was eventually picked up at selection 34 in the draft. After being told he would be making his debut against the Tigers at Marvel Stadium this weekend, Briggs drove to his family home to let his parents, Russell and Fiona, know the good news. “He’s worked really hard … he just had to stay patient with all the injuries and then he’s obviously had people in front of him and other ruckmen turn up,” Russell said. “He’s just had to stay patient and work hard so (we’re) really pleased for him.

“To have a kid from the north-west of Sydney playing in the AFL … we’re just chuffed as.”

Briggs has developed into a 200cm, 107kg tap ruckman who can also play forward . He’s worked alongside Shane Mumford and Matt Flynn since arriving at the club, giving him a good couple of sparring partners at training.

A GIANTS fan as a kid, Briggs has been there for the good times and the bad.

“As probably a lot of people know – original members and fans – the GIANTS weren’t too great to follow early, there were some sad times,” Briggs said. “But I think being there from the start really helps with the motivation and drive to play well and succeed for the club and for the members and fans.”

Briggs will become the GIANTS’ fourth AFL debutant of the season – following Tanner Bruhn, Matt Flynn and Conor Stone – when he runs out on Saturday night.

lMedia Release: AFL Sydney matches to be streamed LIVE and FREE on Kayo
Kickability Gala Day a huge success in the Central Westr