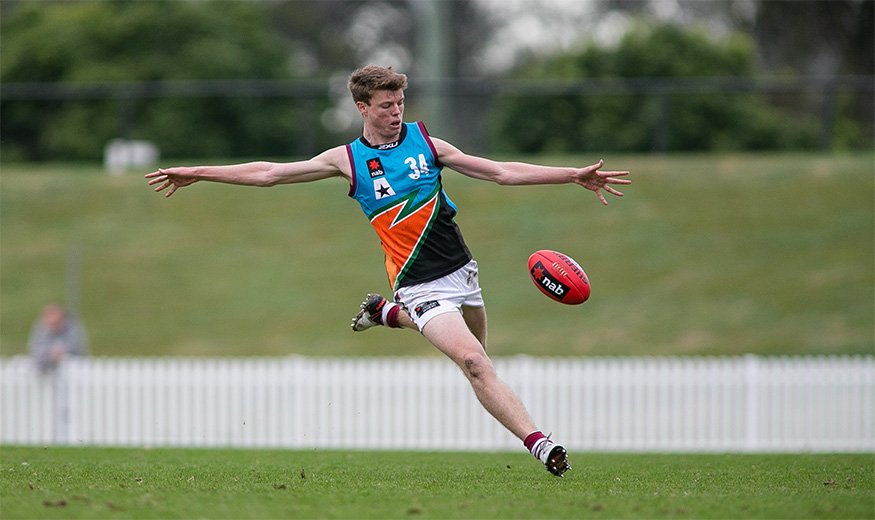 The AFL has today released its Level Two squad of the 2017-2018 NAB AFL Academy, as part of its twenty-first intake into the program.

Two players from the New South Wales and ACT region have been selected including Nick Blakey from the Sydney Swans Academy and Matthew Walker of the GIANTS Academy. This follows the selection of Josh Rayner and Liam Delahunty into the Level One category of the NAB AFL Academy earlier this year.

Blakey, the son of North Melbourne and Fitzroy great, John Blakey, had a difficult year, sidelined for months after suffering a stress fracture in his back. Despite this, his work with the Swans Academy in recent years, his high leap and ability to read the play, all worked in his advantage.

Walker, who plays for the Murray Bushrangers in the TAC Cup, comes from the Murray Riverina and recently took part in the NAB AFL Under 17s All Stars match during Grand Final week in Geelong. A part of the Level One NAB AFL Academy last year, Walker has also traveled with the Under 17s All Australian side who took on the NZ Hawks in recent years.

Under the guidance of NAB AFL Academy Head Coach, Luke Power and Assistant Coaches, Brad Johnson, Peter Sumich and Brent Harvey, the squad will come together for accelerated football and personal development camps, to be help in Australia and overseas in the next 12 months.

The first camp will take place in Darwin in late November, based at the Michael Long Learning and Leadership Centre before the squad will travel to the world-renowned IMG Academy in Florida, USA in January 2018 for a High Performance Training camp, where players will prepare for their AFL Draft year.

Over two decades, the NAB AFL Academy has produced:

AFL International and National Talent Manager Kevin Sheehan said that ‘the NAB AFL Academy continues into its third decade to provide accelerated development for our next generation of AFL stars. As well as a major focus on the playing side of their development, the Academy will again look to nurture our future leaders of the game with the environment created under Luke Power.’