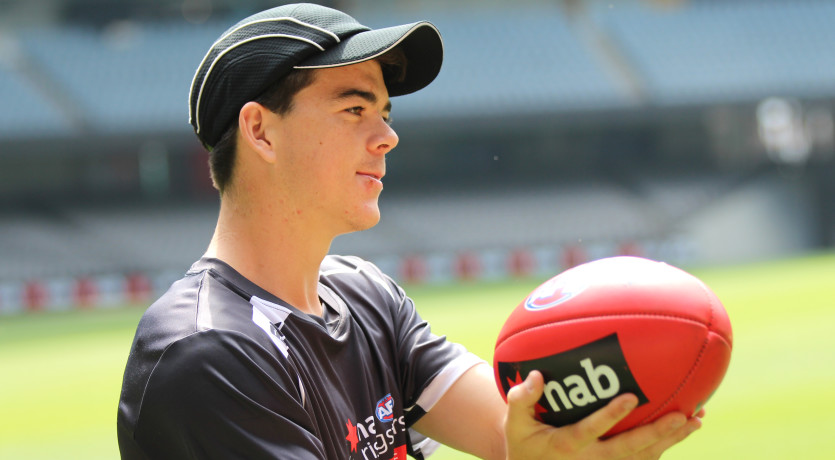 Despite an unconventional pathway Matthew Kennedy has firmed as a top ten Draft prospect.

This article originally appeared on afl.com.au.

Three weeks ago, as the best draft prospects battled it out in under-18 finals around Australia, some AFL club recruiters were arriving in Narrandera after making the four-and-a-half hour drive from Melbourne.

The small town in the Riverina region of New South Wales was hosting the Grand Final between Collingullie GP and Mangloplah CUE.

Matt Kennedy, a leading midfielder of this year’s crop, was playing for Collingullie and playing well: he kicked three goals from nearly 30 disposals to help his club to back-to-back flags.

Before this year, Kennedy had played two seasons with Collingullie, a tiny town 15 minutes outside of Wagga Wagga. But removed from the traditional talent pathway and having missed out on a representative team as an under-15 for being too small, the teenager had always felt so far away from the top level.

“But dad always told me that if I was good enough I’d make it, and that they’ll find you,” Kennedy said. “There’s recruiters everywhere these days. They find you.”

Kennedy started the year as a prospect who hadn’t been a part of any of the regular talent programs and as one few clubs knew. He quickly became a player everyone was taking notice of and one every club wanted.

After missing out on that under-15s team and then developing a few injuries as he started to grow, Kennedy’s father Frank thought it was best for his youngest son to stay at home and play local football with his older brothers.

Kennedy is the youngest of four boys – James is 25, Daniel 22 and 20-year-old Nick – and he also has an older sister, Jo. At times he was frustrated by his dad’s decision to shield him from the higher levels, thinking his aim to be on an AFL list would go unfulfilled.

“I always wanted to play all of the representative footy, because I thought you had to get your name out there to have a chance of making it,” the 18-year-old said.

“There were a few times where I pressed my case to try out somewhere, but I’ve got a lot of trust in him that he was doing it for me. He’s pulled the right reign, I think.”

At the end of last year, he started training with Greater Western Sydney’s academy once a week. Wagga Wagga is a part of the Giants’ expansive academy zone, and the club will get first access to Kennedy at November’s draft under the bidding rules.

Kennedy visited the Giants for a week in January and enjoyed that experience, but still hadn’t really shown his ability. That came a little later, when he starred in the academy’s trial games to win a place in the NSW/ACT Rams’ side for the TAC Cup. Matthew Kennedy shares a laugh with Jacob Hopper at the Draft Combine.

He wasted no time in stringing together a number of impressive games. As a big midfielder (188cm, 80kg), he could move well across the ground, kick nicely and take strong, contested marks overhead. He also showed good goalsense: when forward, he has a knack of slotting one or two a game.

Knowing he had been off the scene, Kennedy set himself to start his season with a bang. “I knew I had to play good footy to get my name out there,” he said.

Being the youngest brother has probably helped in that case. Kennedy started training with Collingullie’s senior team when he was 11, and all four brothers have played in the past two flags for the club. Kennedy laughs at the brawls they have shared at home and with neighbours: his nickname is Bamm-Bamm, after the Flintstones character.

LISTEN: Road to the Draft podcast

It was also one of his brothers whose pass led to the biggest setback of Kennedy’s season. In June, during a break from the Rams’ TAC Cup campaign, he went and played back home for a game.

But in a marking contest he fell and tore the medial ligament in his left knee. It ruled him out of the under-18 championships, which were due to start two weeks later, and he missed the middle three months of the year.

“It was painful to watch all my brothers out there playing local footy, and then to play in the nationals I had to put on a brave face around the team,” he said.

“The weeks were annoying with a lot of rehab, bike riding, squats, and swimming to get back by the end of the year, but I came back and played in a premiership so it was worth it. I haven’t even thought about the knee since I came back, it doesn’t worry me at all.”

Kennedy’s football destination next month seems pretty clear. A bid for Kennedy, like fellow GWS academy prospect Jacob Hopper, is tipped to come in the first 10 picks, and the Giants are expected to match it.

Kennedy says the club’s recruiting team hasn’t given him any indication of its plans.

“I haven’t had any contact or confirmation about that at all. With the new draft system it’s hard to tell where you’re going because it’s all live,” he said.

That concept seemed a long way off this time last year for Kennedy. So did playing on the MCG on Grand Final morning as part of a curtainraiser game last week, or this week being interviewed by a stack of clubs at Etihad Stadium at the NAB AFL Draft Combine.

“Schoolmates have said to me ‘You do know you’re living our dream, don’t you?’ and you don’t know how to answer it,” Kennedy said.

“You don’t want to be arrogant but you say ‘Thanks’ and try to move on and change the subject. I realise I’m in a pretty good and fortunate spot at the moment. I can’t really believe how the year’s panned out.”