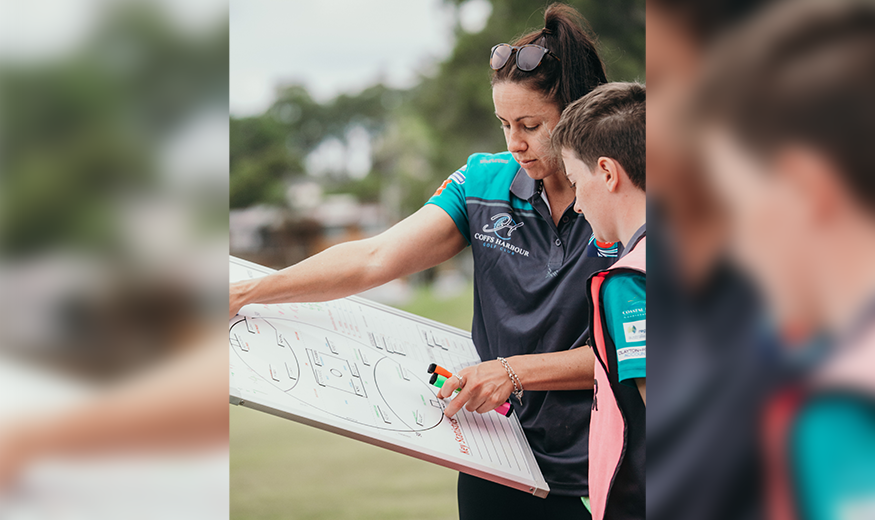 Katika Adams doesn’t make a big deal out of what she’s doing on NSW’s north coast. However, the WA product has made a big splash since moving to Coffs Harbour and joining the town’s powerhouse club, the Breakers, three years ago.

Katika captained the women’s seniors to a premiership in 2020, a match that saw her tear her ACL for the second time and, possibly, end her playing career. She was, “happy to go out on a high,” but you get the feeling this injury is the start of big things off the field.

Now focussed solely on coaching in 2021, Katika’s skills in leadership and strategy – which were already exemplary – have gone to another level. She coaches the Breakers’ reserve grade senior men’s side, the Swans Academy boys and the North Coast Academy of Sport girls.

Katika’s life in footy is coloured with top grade success. Long touted as an inaugural AFLW player, she would never get her chance, with injury cruelling her playing journey.

“Doing my ACL at that time meant I was stopped right at the time when AFLW was gaining traction,” Katika said. After having about six years out of the game she’d played all her life, Katika moved to Coffs Harbour where playing footy offered her the chance to, “build networks and friends…so I thought I’d give it another crack.” Uprooting to a traditionally non-AFL part of Australia from football heartland in Perth gave Katika a new purpose with her footy – it wasn’t just about wins, losses and personal performance, it was about building others up, especially younger players, and growing the game.

“I’m super passionate about really good, young AFLW players being able to realise their full potential and get drafted.”

Katika credits the AFLW with making a big impression on young athletes striving to be their best: “We’re seeing some beautiful players coming from up here. I’m talking about girls who are 10 years old being able to kick 30 metres! It’s phenomenal.

“There was a period about 10 or 15 years ago when we were developing girls in their 20s to play the sport. Now we are getting motor skills and tactics happening in younger girls, we’re seeing a better brand of football. That’s evident in the AFLW where the crowds are growing because the football’s getting better and the competition’s getting better.”

Even though her passion runs with creating pathways for youth girls to become elite players, Katika’s reserve grade men (which she co-coaches with Tyrone Jones) is going well, having cemented a finals berth and looking good for the Breakers’ first reserves premiership.

“We just wanted to bring a bit of light structure to the team, but a little bit of fun, too,” she said of the coaching philosophy. “We’ve had great success as we get people showing up to training in numbers of 20 or 25 to training on a Tuesday and Thursday night, which for most clubs would be unheard of.”

Whether it’s having fun and chalking up wins with the reserves, or fostering young talent, Katika has excelled during her relatively short tenure as coach. Her playing prowess has crossed effortlessly into the coaching scene, and when asked about her desire to coach at the elite level, she was excited at the prospect: “My drive and my passion comes from being able to help young women reach their full potential. If I can be apart of that by bettering my coaching skills and following a career into the AFLW coaching sphere, I would love that.”

Despite being many hours from footy heartland, Katika Adams’ commitment, passion and skill as a coach to diverse playing groups is being noticed and we look forward to seeing the next chapter in her footy life. For now though, she’s loving life in Coffs making an impact on the next generation of AFLW stars.