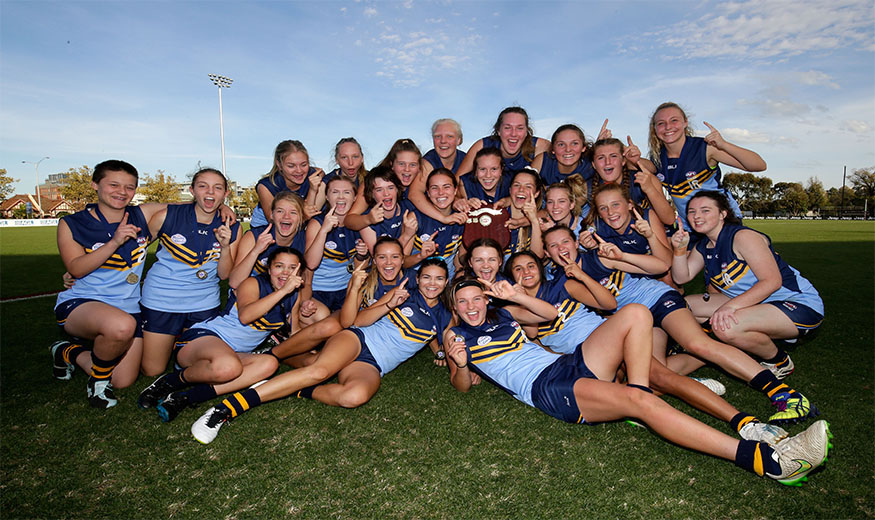 Jordyn Jolliffe has started her promising AFL career as a wanted player.

Born in Victoria and playing for the Woorinen Football Club on weekends, you could be mistaken for thinking Jolliffe’s allegiances lie over the border. However, it will be the NSW/ACT Youth Girls state side that she will represent in this weekend’s Round 1 matches of the NAB AFL Women’s U18 Championships.

Jolliffe and her family live in Balranald, about two hours south-east of Mildura in Victoria – on the New South Wales side. Due to her geographical placing, she trains with the Bendigo Pioneers Academy, but concurrently represents the GWS GIANTS Female Academy as well.

Hoping to one day gain a spot on the GWS GIANTS AFL Women’s list, Jolliffe has already played on their home turf, last week playing for NSW/ACT in a practice match on Spotless Stadium – an experience she describes as ‘unreal’.

Jolliffe is also mentored by their 2017 AFLW marquee player, Renee Forth. The pair were connected at the NAB AFL Women’s National Academy camps, which Jolliffe was invited to attend with her NSW/ACT teammates, Alyce Parker, Angela Priftis and Haneen Zrieka.

“She [Forth] is really easy to get along with, and someone that you can talk to and trust,” says Jolliffe.

It is through her experiences with Forth, and during her time in the NSW/ACT Talent Pathway and the National Academy, that Jolliffe has realised results do not come for free.

“She [Forth] said that if you want to get to where you want to be, you have to put in the extra work, and it’s not that hard if you really want it.

“The Talent Pathway made me realise that if I get a lot fitter and get working on my skills – the basics – it could take me a long way.”

Making it in the AFL Women’s competition would be a long way from where she started as a child. Playing Auskick with her cousins from an early age, Jolliffe ended up playing netball once she hit the age where girls were no longer allowed to play in teams with boys. With no girls teams in her area at the time, she had no choice but to leave the sport.

Luckily, as girls and women’s AFL grew, and Woorinen Football Club started a girls’ team, Jolliffe was asked to return to the sport she loves.

“I feel that with netball you’re sort of stopped from going anywhere. With footy you can run, there are no lines to stop you from running.

Looking up to players such as Gary Ablett Jnr, Lindsay Gilbee – “that kick of his!” – and Erin Phillips, Jolliffe is not short of great examples to model her game on.

This weekend Jolliffe will be hoping to channel her inner Erin Phillips as she lines up in the forwards for the NSW/ACT Youth Girls side to play Queensland and Western Australia.

In a last weekend’s practice match, Jolliffe kicked three goals in an impressive performance from the whole team, who are said to be ready and raring for their opening matches of the Championships.

“We’re excited and nervous but mostly ready to get out there, and just play footy.”

You can see Jordyn Jolliffe and her NSW/ACT Youth Girls teammates play Queensland at Blacktown International Sports tonight, with kick-off at 6.30pm. They will also play Western Australia on Saturday in Blacktown at 2:30pm.

If you can’t make it to see the action live, check out the AFL Women’s YouTube channel for live streaming.