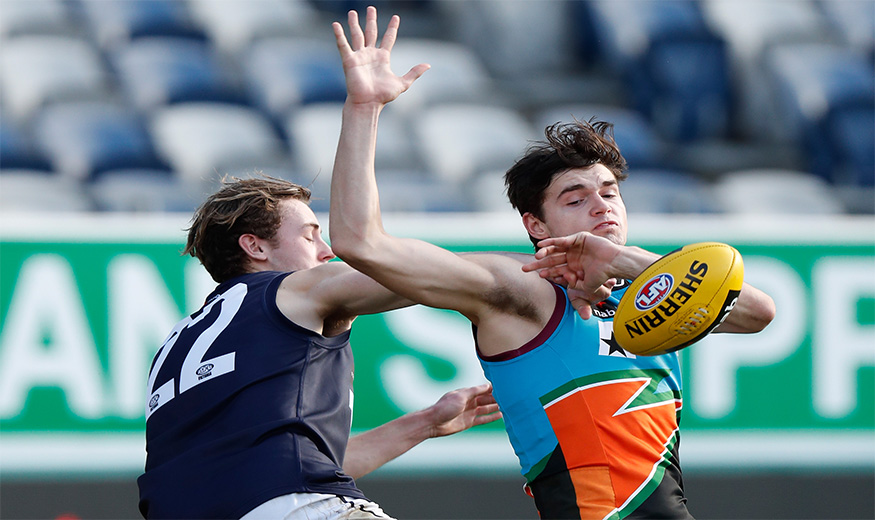 ALLIES forward Jarrod Brander produced his best performance of the NAB AFL Under-18 Championships, playing a commanding role up forward in his side’s upset three-point win over Vic Metro at Simonds Stadium on Wednesday.

The thrilling 11.10 (76) to 10.13 (73) victory, which was confirmed when Swans academy-listed player Jack Hardman kicked a clever goal around the corner with just over a minute to play, was the Allies’ first win and Vic Metro’s first loss of the Championships.

Regardless, Metro’s 3-1 record across the Carnival was enough for them to claim back-to-back Division One titles for the first time since 2002.

At 194cm and 89kg, Brander, a possible top-10 draft pick from the Bendigo Pioneers, has a real presence about him and it showed out in the way he attacked the footy in the air against Metro.

Brander constantly hit up at the football, displaying his power and athleticism by taking nine marks and finishing with three goals from 16 touches, including an important one that put his side back in front in the final term.

Brander spent the first two games of the Championships playing as a key defender but can legitimately play at both ends of the ground.

Allies midfielder Zac Bailey, who hails from the Northern Territory but plays with Norwood in the SANFL, was prominent through the middle, with his work rate and burst away from stoppages evident in his team-high 23 disposals.

Connor Ballenden, a member of the Brisbane Lions’ academy, reinforced the Allies’ defence when he went down there in the second half, playing an important intercept role and distributing the footy with a powerful leg.

Potential Richmond father-son selection Patrick Naish and Andrew Brayshaw, the younger brother of Melbourne’s Angus, were the pick of the Metro players.

Naish, the son of former Tiger Chris, who played 143 games in the yellow and black, gathered 26 disposals in a classy display through the midfield, while Nick Coffield ended the match with a game-high 29 touches.

As a small midfielder, Brayshaw (22 disposals and five inside 50s) is an no-fuss type of player but his cleanness at ground level and ability to not waste his possessions was noticeable, particularly in the first half.

Will Sutherland, who continues to stamp himself as the leading tall forward in this year’s draft class, booted two goals in the third quarter as Metro took a five-point lead into the final change.

It was a see-sawing final term as the lead changed hands five times and when possible No.1 draft choice Cameron Rayner booted his third goal with less than three minutes remaining in the contest, Metro looked to have sewn the game up.

But the Allies fought hard to work the footy down to their end of the ground and Hardman bobbed up in the right place at the right time to sink the match-winning goal after an excellent front and square crumb.