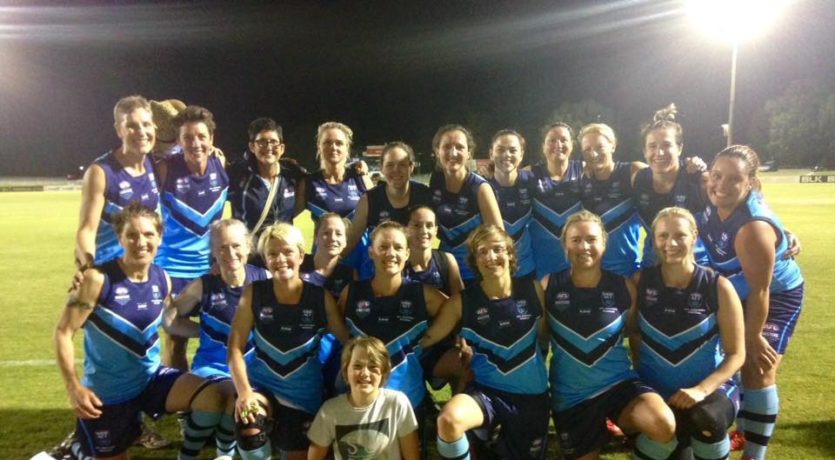 2016 has been a big year for women’s footy so it was fitting that women were invited to participate for the first time in the 2016 AFL National Masters Carnival held on the Gold Coast.

ACT player Pam Andrew led the charge by working closely with the AFL Masters Board and committee members to lobby for the inclusion of women. A scramble to get players and states registered and uniforms ordered then ensued.

Coach of UNSW-ES, Sydney AFL Premiers and former state coach, Tracey Kick rallied the NSW troops through a Facebook group after seeing a post about the inclusion of women in the national carnival.

Soon 22 committed players were identified and a NSW team was formed.

In the inaugural year, each team was allowed up to five players aged between 30-35 and all others were to be over 35. Three teams competed at the carnival. Victoria (made up of players from Victoria, Tasmania, ACT and the Northern Territory), NSW (made up of NSW players) and QLD (made up of host state Queensland players).

The carnival was played over three days and each team played each other twice.

The team managed one training session, with all players meeting at the jumper presentation at the Southport Sharks AFC on the first day of competition.

There was a level of anxiety in the team with the NSW team drawing the Big V (Victoria) for their first match. Some of the players were members of the 2013 NSW State team which held Victoria scoreless for 10 minutes, so with a quick reminder that anything is possible, the inaugural NSW Masters team took to the field led by multi capped representative player and former SWAFL president Jemma Still.

The first game set the tone for the carnival. The experienced representative midfield won the contested ball repeatedly, the pace was ferocious, the backs repelled attack and the forwards kicked with accuracy. NSW was a well-oiled machine!

Undefeated over six games, the outstanding results are below. At the presentation night held at Sea World, 10 NSW players were named in the inaugural All Australian Team and the Best and Fairest for the Carnival was won by NSW player Holly Cogle.

Players selected in the All Australian Women’s Masters Team