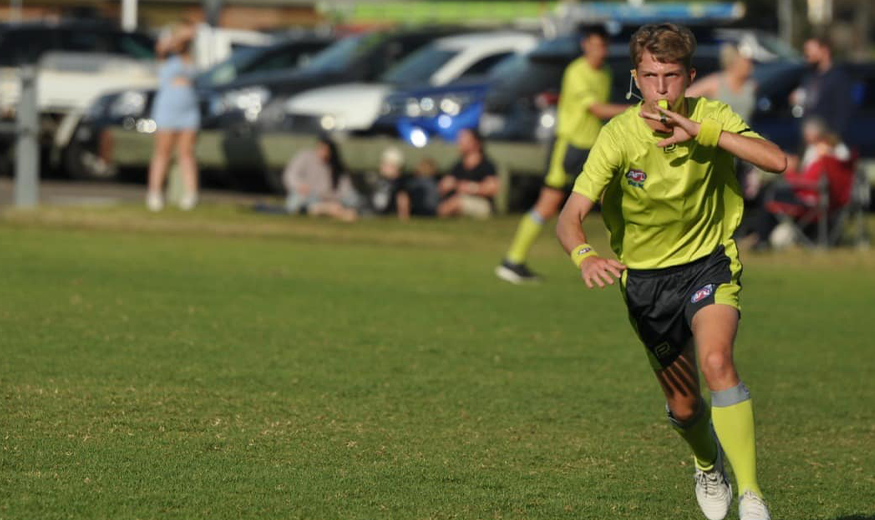 Seventeen-year-old umpire, Cypress Hart, is the product of many different environments. He spent his early years regional Western Australia, moved to Rosebery in inner Sydney and is now based in Koolewong on the Central Coast (Darkinjung country).

One thing that hasn’t changed is his love of footy and, for the past five years, his unwavering dedication to umpiring.

Hart grew up a Fremantle Dockers fan and began playing football for the Moore Park Tigers when he moved to Sydney. He jumped at the opportunity to start umpiring after being prompted by a club email. “I wasn’t much of a footy star, so I thought why not give it a go?” he said.

After a couple of years playing and umpiring concurrently, Hart had his big break…literally. A broken arm meant he missed a large portion of the playing season, unable to sustain any contact to the injury.

Rather than sitting on the sidelines, he spent his non-playing weeks umpiring. This was the spark that Hart needed to turn his hobby into an obsession.

At the end of that season, he found himself “so committed and so passionate, and getting really excited about umpiring.” The choice to hang up the playing boots was an easy one.

Hart’s passion is obvious to anyone who meets him. He is so keen about umpiring that he has created an Instagram account dedicated to the pursuit.

In the past five seasons, he has umpired a staggering 271 matches.

What next for Cypress

Hart understands that becoming a professional umpire is a difficult ask, with too few getting the chance to officiate elite matches. However, he is doing all the right things to give himself a chance and deserves the right to dream big.

He admits that “umpiring has ruined football” for him. No longer watching the match, he spends his time studying the umpires, learning their positioning and understanding their reasoning. (His favourites are Ray Chamberlain and Brett Rosebery, if you’re interested.)

Hart also has confidence he is a good umpire, even when working with experienced players in high level community football. He feels he controls the game, without overstepping his role in the match. “The challenge of being a little kid out there, compared to the players, is fun to me,” he said.

COVID cruelled Hart’s ambitions for season 2021. He was regularly umpiring the top division in AFL Hunter Central Coast and he’s worried the season’s likely abandonment could allow his contemporaries to catch-up to his level.

“I was pretty flat when the season on the Central Coast was shut down indefinitely. This was my first season in senior football and I thought I was getting ahead of the curve in terms of umpires my age.

“It just drives me to be better next year, stay in shape and try to umpire the division one grand final next year. But I’ve got a lot of work to do.”

He also understands that being an umpire means being part of something more than blowing a whistle on game day.

“The main reason I get so excited about being part of it is I know how vital umpires are to the AFL’s ecosystem at a grassroots level. Let’s say we’re biased or we’re lazy with the interpretation of the rules, we can seriously affect spectators’ and players’ perception of the game.

“As an umpire, I just want to make sure that everyone gets the most enjoyable and full experience of our great game.”

Cypress Hart is one of the good guys in football. He’s thoughtful, skilled, humble and always looking for ways to improve his craft. He ensures us that his bouncing is coming along, and we get the feeling that if the timing is right and his trajectory continues the way it has, he might one day get to umpire on the big stage.

For now, Hart is happy working at the grassroots and doing what he loves as often as he can.

AFL NSW/ACT is heading on a road trip…digitally! Look out for us in a town near you.