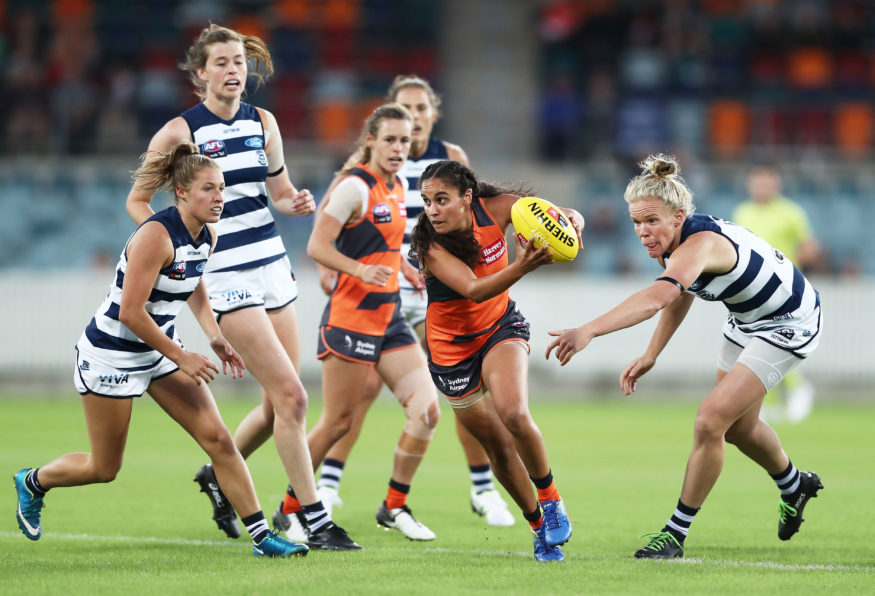 Western Sydney’s Haneen Zreika has been awarded one of the two Round 7 NAB AFL Women’s Rising Star nominations.

The 19-year-old had her stand out game of the season on Friday, where she gathered 17 disposals, laid seven tackles and kicked one goal in her side’s upset win over the Geelong Cats at UNSW Canberra Oval.

Zreika made history in Round One of the 2019 NAB AFL Women’s Competition, becoming the first Muslim women to make her debut in the competition.

Known for her speed and play off half-back, Zreika comes from a rugby league background and has previously represented the Canterbury Bulldogs in the Tarsha Gale Cup before making the switch to Australian Football, joining the Auburn-Penrith Giants.

All AFLW players 21 years and under as at 1 January 2019 and who have not previously been nominated as a rising star qualify for consideration for the award.

Two players will be nominated each week of the NAB AFL Women’s Competition. Each of the 14 NAB AFL Women’s Rising Star nominees throughout the season will be awarded $500 prize money from NAB to acknowledge their great achievement. In addition, NAB will continue to support the development of future footy stars by awarding junior clubs of each nominee with a NAB Club Recognition Award pack of practical and financial resources, valued at $2000.

The overall NAB AFL Women’s Rising Star winner will be awarded $20,000 from NAB and a private banker to assist with securing their financial future.

NAB is proud to support the development of female footballers throughout the country from NAB AFL Auskick through to the NAB AFL Women’s Competition.