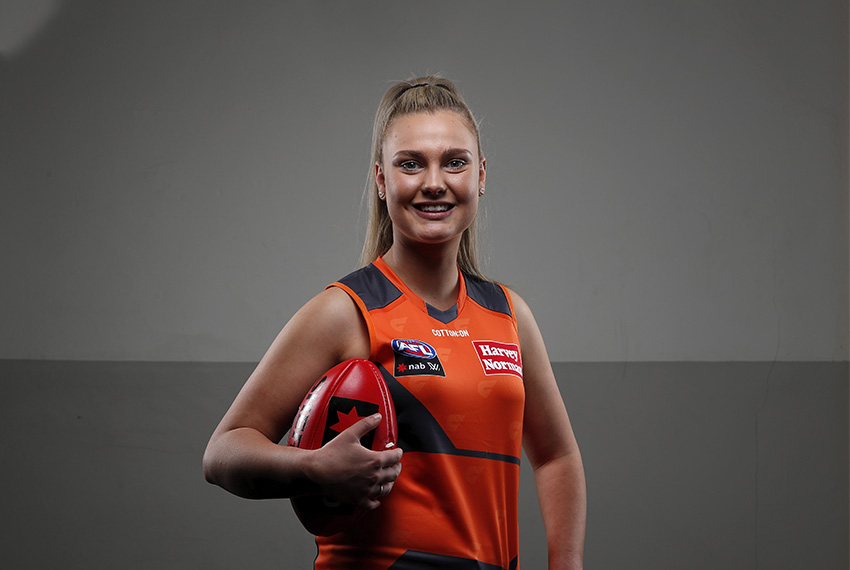 “Looking back at all the stuff that has happened, never did I think I would end up here. I almost gave it all away, but now I am here,” the 18-year-old recruit recounts.

A few years ago, Gorham’s grandmother was diagnosed with cancer. Shortly after, her dad found a lump in his groin and her mother a lump in her breast.

“You don’t really get three for three with cancers, so it was a tough stage,” she said.

It was an incredibly difficult time for Gorham, but also her two older siblings. While Gorham recounts trying to remain positive, it was no easy feat as she watched the changes, especially with her mum and dad.

“I didn’t want to be sad around them because they are the ones that needed help,” she said.

“I just wanted everything to be okay, but I didn’t know if it was going to be; it was mentally draining.”

Gorham admits that going through a hard time took up a lot of energy.

“I think that is why I didn’t enjoy playing footy as much, hanging out with friends as much, all the things that you love to do, you fall out of that a bit,” she said.

It was her mum who encouraged her to get back into football. Coincidently, it was the night before round one kicked off for her local team in Canberra, the Belconnen Magpies.

She went on to win the AFL Canberra Best and Fairest, the Bainrot Medal.

It was the wakeup call Gorham needed to realise there was a possibility of being drafted, acknowledging that while it was good timing with the 2019 NAB AFLW Draft fast approaching, she only had a few months to work out what she wanted to do with her life.

While there was an initial hesitation in wanting to get drafted, “I was happy in Canberra and didn’t want to get out of my comfort zone,” the young forward ultimately decided to pursue the opportunity.

“I wanted to put myself out there to give something challenging a go.”

For Gorham, being drafted by the GIANTS has allowed her to become herself again, explaining that playing football “means the world” to her.

However, while it was a “nice surprise to be welcomed straight away”, it was a surreal experience and one that almost didn’t happen due to nerves.

“I wasn’t going to come to my first training session. I was in all sorts of trouble,” she laughs.

“I didn’t think I was going to make it out the door, but as soon as I got here (accompanied by her parents), all the nerves seemed to go.

“When you see familiar faces, it’s nice and you forget about all your nerves, and everything falls into place.”

Empathetic and humble, Gorham describes herself as being easy-going. It is a quality she believes is a “pretty good thing in sport because you can get a bit of criticism here and there”.

Her dad has helped by reminding her not take criticism of anyone you wouldn’t take advice from. Gorham says that she now realises “whose opinion is important and whose isn’t”.

For Gorham, her family’s opinion is the most important, with her teammates very close behind that.

“You don’t play footy, a team sport for yourself: you are playing for your team, so whatever they think of you is very important to me,” Gorham said.

Gorham, whose focus is to be a team player and work towards debuting in her fist game, ultimately wants to have fun.

“There is a balance to it though, and I want to be that person who brings that balance of being serious but having a bit of fun with it as well,” she said.

Smiling, she adds: “I definitely want to win and do what I can to win but having fun with it.”