GIANTS Ready for Suns to Bring the Heat 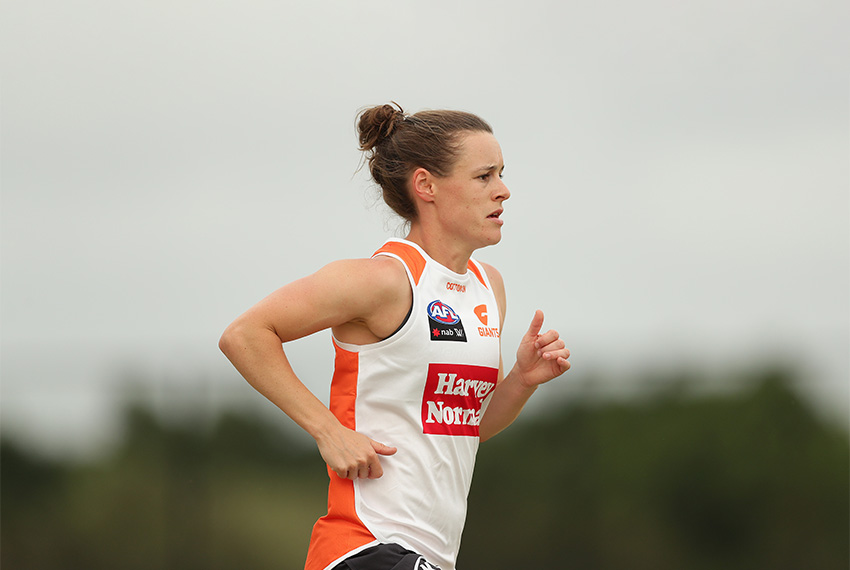 GIANTS captain Alicia Eva says her team will not be taking the round one clash against the Gold Coast Suns lightly, despite the relative inexperience of the opposition.

The GIANTS are yet to win a round one game since joining the NAB AFL Women’s Competition in 2017.

The Suns have 16 players on their list who are yet to play an AFL Women’s game, but Eva warns the element of the unknown is not to be underestimated.

“We all know what round one is like; hotly contested and the first centre bounce everyone wants to crack in,” Eva said.

The pre-season is often used as a time for experimentation, but the GIANTS won’t be caught off guard if Gold Coast throws a spanner in the works in round one.

“We know there are some players like Leah Kasler who Brisbane just played back, but she played some of the practice game up forward, so we’ve put a bit of homework in there.”

Conversely, the GIANTS won’t look too different structurally, but the pre-season focus has been on moving the ball in different patterns and dominating the contested possession count.

The GIANTS will need others to step up on the inside, following the surprise retirement of inaugural captain Amanda Farrugia.

Eva and Farrugia are close friends on and off the field, with the pair catching up for weekly dinners.

“I found out about ‘Fridge’s’ (Farrugia’s) retirement a few days before the rest of the playing group did.

“My honest reaction was shock and sadness, purely because we had been doing the pre-season training block together and gearing up to go round again.

“Fridge has been a leader in New South Wales football and a leader nationally, so it’s a big loss for us and big shoes to fill.”

Despite stepping away from the field, Farrugia will still be around the game, being named the 2020 NAB AFL Women’s Premiership Cup Ambassador.

Eva had been Farrugia’s vice-captain since moving to the GIANTS in 2018, and her mentor was one of the first people to find about Eva’s leadership promotion.

“I think she knew about it before I did.

“She took me out for dinner the day Al (coach Alan McConnell) asked me and more or less said ‘you’ve got this’.”

While Farrugia has been a guide for Eva on the playing field, Essendon coach John Worsfold has played a role as her mentor in the coaching box.

Eva is a development coach for the GIANTS’ Academy and NEAFL teams and met Worsfold after being awarded a scholarship through the AFL Coaches Association.

The two will occasionally meet up for a coffee and discuss philosophies and how to react to different players and situations.

“There’s this one-size fits all coaching philosophy which a lot of coaches try to adopt, but with me I think about things a little bit differently.”

“There’s not really too much talk about X’s and O’s, but more about the art of coaching.”

“We’ve talked a lot about the need to build rapport with your playing group.”

“It’s been great for me to use him as a sounding board.”

Eva will put on her coaching hat again later in the year, but for now all her focus is on getting a first-up win at Blacktown International Sportspark on Saturday.