GIANTS hold a Ladder up for Western Sydney youth 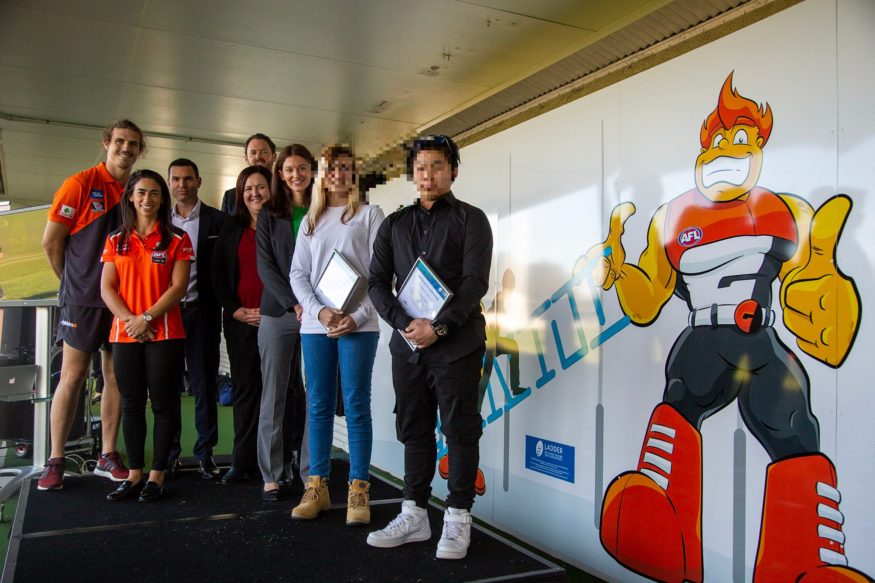 While AFL NSW/ACT fans know Alicia Eva as the spark that ignites the GWS GIANTS AFL Women’s midfield, as well as their state Youth Girls Head Coach, Eva’s day job most know little about – one of Eva’s day jobs, we should say.

When not running the midfield of the GIANTS Academy, working as a development coach for GIANTS NEAFL, or running the show for our Youth Girls Rams, Eva works as a Programs Coordinator for Ladder, the official charity of the AFL Players’ Association.

Ladder is an independent not-for-profit organisation helping young people break the cycle of homelessness. Formed in 2007 in Melbourne, Ladder is relatively new to New South Wales where they only recently opened a branch in the Western Sydney suburb of Mount Druitt in 2017.

‘Ladder Step Up Western Sydney’ works on an Education, Employment and Training (EET) engagement model to help young people (15-20 years) who have had an out-of-home care (OOHC) experience, transition into independence.

As a part of Eva’s role with Ladder, she works with young people in tough situations, needing help to get on track before entering into adult life.

Eva, who also has a degree in Psychology, works with key stakeholders for Ladder and assists in building referrals to the organisation, while also creating awareness for their work across Western Sydney. In talking to Eva however, you get the impression that being on the ‘front line’ with the young people and their development coaches, is where her passion at Ladder lies.

“We’re not case workers and we’re not counselors, we work with young people who need help with building their everyday life skills, and help them transition into an independent adult life.

“We engage our young people with services where they can get the appropriate help and support that they need in whatever area that may be. We’re that bridging part in-between the two.”

With many AFL connections within Ladder in Western Sydney, Development Coaches at the organisation have included the likes of Codie Briggs, who was a part of the inaugural GWS GIANTS AFLW side. Current GIANTS defender, Tanya Hetherington also worked for the Western Sydney branch of Ladder during the 2018 AFLW season as a Programs Officer. As the AFL Players’ Association’s official charity, all AFL and AFLW players contribute a certain amount of their salaries to Ladder on a weekly basis, a donation Eva gets to see utilised directly.

“We get to see first hand where that support and that funding is going, which is really rewarding.

“[As GIANTS involved with Ladder] the cool thing is, we’re all involved or have been involved at the GIANTS, so what could have been a hard relationship to initiate, we’ve already got that relationship, so we’re able to bring young people into the club and do cool things such as the artwork unveiled today.

Eva, along with Simone Czech – Executive Director at the NSW Department of Family and Community Services, James Avery – Chief Operating Officer of the GIANTS, Phil Davis and Amanda Farrugia of the AFL and AFLW GIANTS, joined two young members of Ladder yesterday in unveiling an artwork set to permanently stand tall at GIANTS HQ. AFL NSW/ACT CEO, Sam Graham was also on hand to help reveal the artwork as a Board Member of the Ladder organisation.

As the major community partner of Ladder Step Up New South Wales, the young people of Ladder wanted to give back to the GIANTS, and tangibly celebrate the ongoing partnership and support that the club provides.

Together, the idea was formed to design an artwork which now stands proudly as the backdrop to Tom Wills Oval. In conjunction with GIANTS staff who assisted with the project in aspects such as the graphic design, the mural will be added to on a regular basis by future Ladder participants, offering a physical representation of Ladder and the GIANTS’ impact on the Western Sydney community.

On the GIANTS’ involvement with Ladder, Eva had one word – “Massive”. Speaking about one of the artists behind the artwork, Eva explains how the contribution of the GIANTS to Ladder has been able to impact a young life.

“It’s not just the small things like game day involvement and tickets, we actually get to bring these young people into the club and do things like have them work with the graphic designer at the club to come up with the artwork. And not just once, she’s come in here on a number of days, across a number of months and developed a really professional relationship.

“For someone who once upon a time had no aspirations of being able to crack it in this space, now she’s got this amazing contact and can put it on her résumé.

“The GIANTS brand just keeps growing bigger and bigger, and for our young people to say they’ve been involved with them, hopefully in a few years time they’ll see this as a really big platform that they have jumped off from into adult life.”

You can support Ladder by visiting their website today – ladder.org.au/support-us/donate.