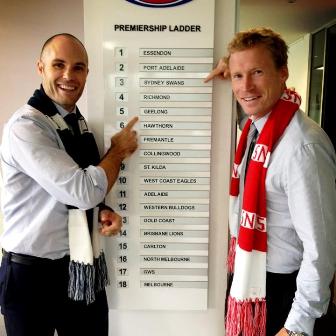 Harley will be joined by Wayne Carey, Dermott Brereton, Robert Dipierdomenico, Stephen Silvagni, Kevin Sheedy, Luke Power and Chad Cornes and Tom Harley for the lunch at the Star Event Centre in Sydney on September 25.

They will also be joined by former Swans premiership player Craig Bolton for the GIANTS’ inaugural Grand Final lunch in Canberra at the National Arboretum on September 26.

“These are some of the biggest names in the game and have an extraordinary 28 premierships between them,” Matthews said.

“As we countdown to the AFL Grand Final, it will be a great chance to re-live some past glories but also get a tremendous insight into the game from people who have done it all.

“We are particularly pleased to host our first ever Toyota AFL Grand Final Lunch in Canberra at the National Arboretum where we will also unveil the Team of the Century from the ACT and Southern New South Wales.

“Quite simply, these are events not to be missed for AFL fans in Sydney and Canberra in the biggest week of the year.”

Speakers include at the lunches in Sydney and Canberra include:

Wayne Carey – the man they call ‘King’ is arguably the greatest player ever. Captained North Melbourne to the 1996 and 1999 premierships.

Dermott Brereton – the talented and flamboyant forward was a five time premiership player with Hawthorn. Now a respected TV commentator.

Robert Dipierdomenico – ‘Dipper’ played in eight grand finals and five premierships for Hawthorn and is one of the toughest and most colourful players the game has seen.

Kevin Sheedy – played in three premierships for Richmond and coached Essendon to four flags. The inaugural coach of the Greater Western Sydney GIANTS.

Stephen Silvagni – the fullback in the VFL/AFL Team of the Century and a member of Carlton’s 1987 and 1995 premiership teams.

Chad Cornes – a member of Port Adelaide’s first AFL premiership in 2004 and played more than 250 games with the Power and Greater Western Sydney GIANTS.

Luke Power – a member of Brisbane’s premiership three-peat from 2001-3 and 300 games with the Lions and Greater Western Sydney GIANTS.

Tom Harley – captained Geelong to its drought breaking 2007 premiership and again in 2009. Renowned as one of the greatest captains of the modern era.

Craig Bolton – originally from Canberra, Bolton played for the Brisbane Lions and Sydney Swans and was a member of the Swans’ historic 2005 premiership side.

Tickets for the Canberra 2013 Toyota AFL Grand Final Lunch at the National Arboretum in Canberra on Thursday September 26 are $185 per person or $1,750 for a table of 10.

For all enquiries or to make a booking contact Andrew Hewlett on 0413 444 879 or Andrew.Hewlett@gwsgiants.com.au