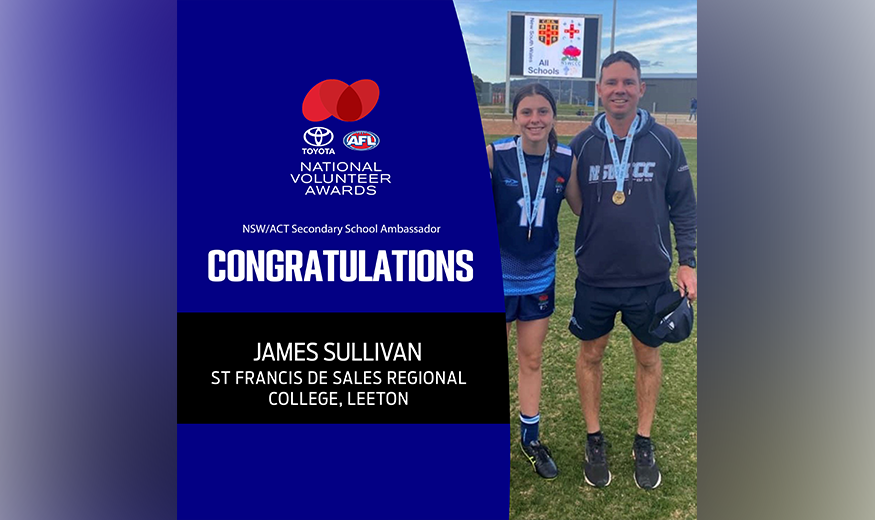 Many of our volunteers of the year in 2021 came from regions where football is a relatively new concept for the community, but for James Sullivan, AFL NSW/ACT’s Senior School Ambassador of the Year, football is a way of life.

The teacher at St Francis de Sales Regional College, Leeton is proud of the accolade… even his nomination came as a surprise. “I didn’t try to do anything that stood out, I just did things that were pretty normal,” he said.

What is normal to Sullivan, probably sounds outstanding to others.

On top of his usual day to day as a PE and woodwork teacher, Sullivan coaches a few of the school teams, arranges an AFL 9s tournament for anyone to get involved in and oversees a program where students can become recognised umpires.

“Like a lot of people I love the game and love being involved,” said Sullivan, who has played all his life and is “coming to the end of [his] career” at Narrandera.

A former student of St Francis de Sales, Sullivan understands as well as anyone that footy is the top sport at the college, and he’s pleased, “it’s been taking off further, especially with the girls.”

The school prides itself on its football prowess and thanks to Sullivan and other committed teachers, it’s future is in safe hands.