All-rounder Amber set for the biggest stage yet 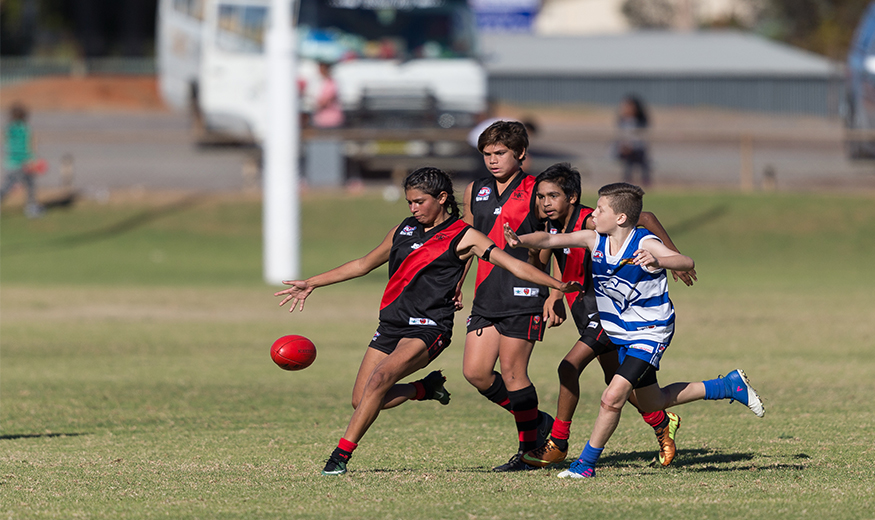 Fourteen-year-old Barkinji girl, Amber Evans grew up in the remote town of Ivanhoe, about six hours west of the South Australian in the middle of New South Wales.

Having never played AFL before, it was not until Evans and her family moved to Broken Hill in 2014, that she would pick up a Sherrin and join the local club, West Broken Hill.

“My older brother Cassidy began playing AFL when we arrived in Broken Hill, and he suggested I have a go,” Evans said.

“I started playing and found that I loved it even though there were no teams for girls my age, and I had to play in the boys’ teams.”

While the Championships will be filled with football, they will also offer the Under 15-year-olds the chance to celebrate and embrace their various cultures. As such, Evans is looking forward to the opportunity not only to develop her footy skills, but also to serve as a role model for others in her community.

“I’m from a fairly remote area and don’t have the chance to show many people what I am capable of, so I’m going to make the most of this fantastic opportunity and give it my all,” she said.

“I have proven myself to be a quick learner, and am flexible and adaptable on the football field, so I need to prove that I can demonstrate these qualities in the Championships.

“I would also like to show my family and the Indigenous community back at home that there are lots of opportunities open to us if we are willing to put in the effort and not give up.”

Evans has certainly made the most of the opportunities she has been provided in Broken Hill. As an all-round athlete, she also participates in many sports including athletics and swimming.

Her outstanding athleticism has seen her receive great recognition within her school and local community, being awarded the Tackler of the Year for rugby league in 2013, and the Best and Fairest Award for her netball team in 2014.

In 2017, Evans was named AFL Broken Hill’s Most Consistent Player and has remained in the top six Best and Fairest players for her team over the past two years.

Although Evans is unsure of what she would like to do once she finishes school, she says she would like to see football in her future, in particular the possibility of playing in the new AFL Women’s competition.

When asked about what it means to participate in the Female Diversity Championships, Evans says she feels proud to represent not only New South Wales, but her Aboriginal community, the West Broken Hill Football Club, and the female players of her town.

“I would like everyone to know that I will be doing my best at the Championships to make my family, community and team mates proud, and to show all the people back at home at the footy club who have helped me get here, that I am thankful for everything they have done.”

Amber Evans and the NSW/ACT Kickstart team will be playing at the 2017 Female Diversity Championships against all Australian states and territories this week in Byron Bay.