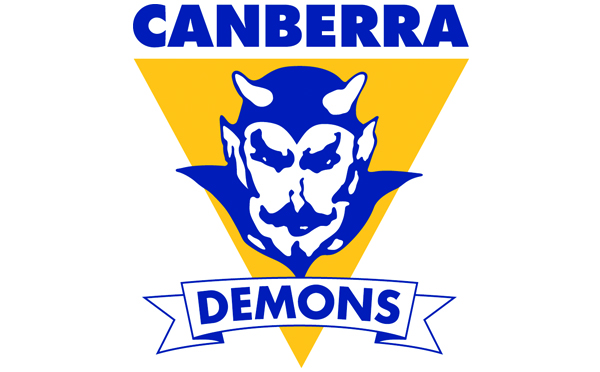 Eastlake Football Club is pleased to introduce the Canberra Demons as the new and only NEAFL team representing the ACT.

Following the recent change to the NEAFL competition, which has left one team representing the Canberra region, the Eastlake Football Club has confirmed its commitment to supporting and developing AFL in Canberra.

AFL ACT / South Coast Manager, Steve Mahar, believes consolidating the talent pathway into one team will ensure there is enough local talent to ensure the Demons hold their own in an increasingly competitive NEAFL competition.

“Having a team that embraces the whole Canberra region will provide a very clear pathway to all of the players in the broader region,” he said.

“It will alleviate any barriers that prevent players from coming to play for a club they have competed against their entire football career. We are hoping that the whole Canberra community gets behind the NEAFL team to make it a success.”

The new Canberra Demons brand draws upon the Club’s history with the Demons logo and team name, however uses the Canberra colours and city name to secure the team’s identity as a state league team and to promote broader engagement with existing AFL Canberra community clubs.

The Club can also confirm it has been working with the AFL to ensure the long-term presence of the NEAFL in Canberra by working towards a 3 year extension, until the end of the 2019 season.

Canberra Demons Head Coach, Ben Waite, hopes the region can produce more home grown talent such as Harry Himmelberg, who was drafted to the GWS Giants with pick No. 16 at last year’s AFL Draft.

“The NEAFL is all about providing strong, quality games for our local talent, giving them the best opportunity to get drafted,” he said.

“The recent change to the NEAFL competition has definitely brought us a lot of reassurance and confidence for the future.”

“One team in the NEAFL competition, under the Canberra banner, complements the GWS GIANTS long term presence in the Capital by providing a local team for the broader football community to support, and demonstrates a clear pathway for emerging stars in the region to continue to enter AFL ranks,” he said.

They will join existing players such as NEAFL representative player Ben Dowdell along with Aaron Bruce, Nick Fothergill, Tom Highmore, Nick Pleming, Ben Halse, Dean Biermann and Matthew Channon who have already committed to the 2016 season.

The Club will continue to operate under the Eastlake banner in the local AFL Canberra competition with team colours, logo etc to remain unchanged.