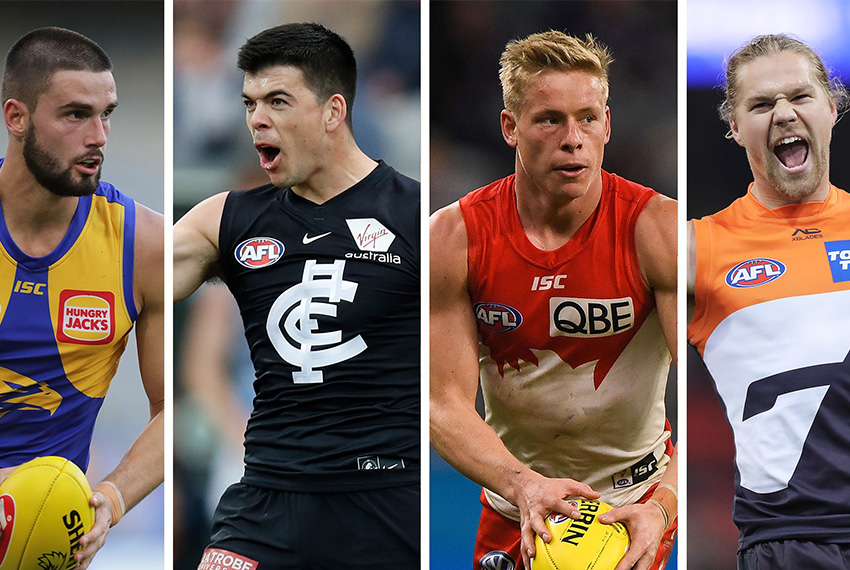 With Sydney’s Braeden Campbell & Errol Gulden touted as a potential first round picks in December’s NAB AFL Draft, we take a look at the recent AFL NSW/ACT players that were drafted in the first round.

A crowd favourite and one of the best young players in the AFL, Heeney played his junior football for the Cardiff Hawks in the Black Diamond competition on the Central Coast.

Joining the QBE Sydney Swans Academy at the age of 12, Heeney was selected by Sydney with pick 18 in the 2014 NAB AFL Draft and has since won the 2018 AFL Mark of the Year award, was selected in the AFL Players’ Association’s 22Under22 team in two of his eligible four years and played his 100th senior game in 2019.

In 2010, aged 13, Mills was approached by then Sydney Swans chairman Andrew Pridham to fill in for the Mosman Swans, impressing enough to earn a place in Sydney’s Academy program. In the 2015 AFL Draft he was selected by the Sydney Swans with their first selection, 3rd overall.

Similar to Isaac Heeney, Mills is considered one of the best young players in the AFL, winning the 2016 AFL Rising Star award and the AFL Players’ Association’s best first year player.

The New South Welshman was elevated to Sydney’s leadership group during the 2018 pre-season at the age of just 21, and he’s now a member of a five-man leadership panel alongside co-captains Josh Kennedy, Luke Parker and Dane Rampe, as well as Lance Franklin.

Hailing from Leeton in Southern NSW, GIANTS Academy graduate Jacob Hopper is a midfielder who’s built a reputation as one of the toughest young midfielders in the AFL since being drafted with the 7th overall selection in the 2015 NAB AFL Draft.

Hopper debuted in his first season at the elite level, earning a NAB AFL Rising Star nomination for his impressive debut game against the Gold Coast.

A member of the GWS GIANTS Academy program, Kennedy was drafted with the 13th selection of the 2015 AFL Draft, after the GIANTS matched a bid from Richmond.

A product of Collinguile, Kennedy played 19 games for the GIANTS before he was traded to Carlton in 2017, where he has played a further 29 games predominately as a forward.

Originating from Wagga Wagga, Himmelberg relocated to Canberra at the age of 17 to further his development with Eastlake and the GIANTS Academy program.

In the 2015 NAB AFL Draft Himmelberg became AFL NSW/ACT’s fourth – first round pick when the GIANTS matched a bid from the Adelaide Crows with the 16th selection.

Once arriving at the GIANTS, Himmelberg enjoyed a successful switch to defence and was selected to make his AFL debut in round 17, 2016.

2017 saw Himmelberg play forward and down back before he established himself as a forward during the GIANTS’ finals campaign, kicking four goals in the club’s Preliminary Final.

A star on the rise, Himmelberg has become one of the GIANTS’ most consistent performers and played a vital role in the GIANTS’ run to the 2019 AFL Grand Final.

Raised in Collingullie alongside former GIANT Matthew Kennedy, Perryman joined the GIANTS Academy as a teenager before joining the club with pick 14 in the 2016 NAB AFL Draft.

A quality player who moves like a natural footballer, Perryman has become one of the GIANTS’ most reliable players with the ability to play across the half back line as well as the midfield where he’s regularly hit the scoreboard.

The 21-year old kicked nine goals across the first four rounds to lead the Coleman Medal early in the season before playing a more defensive role late in 2020.

Marshall was raised in Deniliquin, NSW and despite a promising cricket career, made the decision to focus on football, playing in the TAC Cup with the Murray Bushrangers and the AFL Under 18 Championships with AFL NSW/ACT.

He was drafted with Port Adelaide’s first pick of the 2016 NAB AFL Draft, 16th overall.

In his first year of AFL football, Marshall debuted in Round 22 and played three games to end the season including the elimination final.

The tall forward has showed some terrific signs early in his career, kicking 33 goals from 34 games.

Wentworth’s Jarrod Brander was the highest of the AFL NSW/ACT’s players to be selected in 2017, drafted by the West Coast Eagles with the 13th pick of the NAB AFL Draft.

A tall, athletic forward with a good endurance base and agility for his size, Brander was swung into defence at WAFL level with great success, showing his capabilities at either end of the ground.

Having debuted against the Sydney Swans in 2018, Brander has played 11 games of AFL football and signed a contract extension with West Coast tying him to the club until the end of 2021.

Son of former Fitzroy and North Melbourne dual AFL Premiership midfielder John, Nick Blakey had a choice of three possible clubs, North Melbourne and Brisbane Lions through the father-son rule, and the Sydney Swans as a member of the Swans’ Academy program.

In early 2018 Blakey revealed his preference was to play for the Sydney Swans, and was drafted with the 10th overall pick at the 2018 AFL Draft after Sydney matched a bid from the GIANTS.

Joining the GIANTS Academy at the age of 12, Canberra’s Tom Green is AFL NSW/ACT’s latest first round draftee, selected with pick 10 in the 2019 NAB AFL Draft.

The Marist College product, where fellow GIANT Phil Davis also started his football career, will hope to have his brother Josh joining him at the club next year after impressing in the GIANTS’ Academy program.