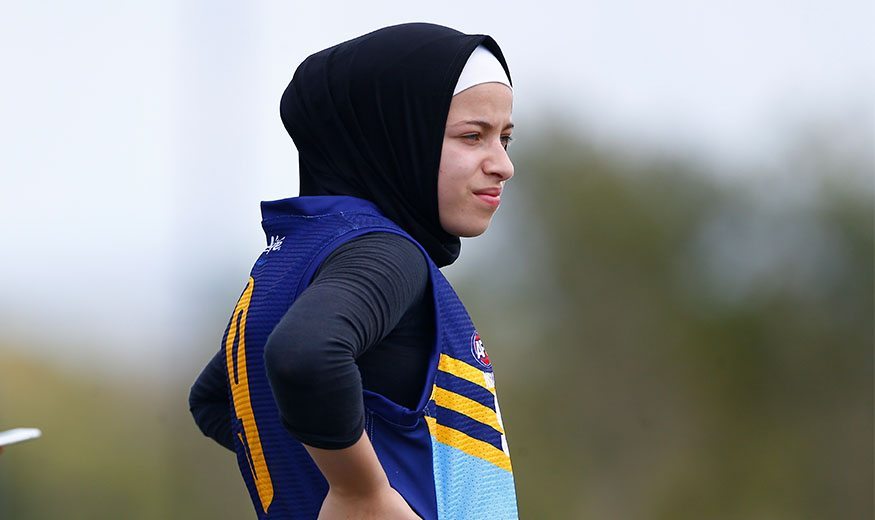 Of special note for footy fans in New South Wales, two stories from Sydney will feature out of the three short films released this morning.

Sydney Swan, Aliir Aliir’s journey from a Kenyan refugee camp to playing in the AFL is highlighted by the campaign – showing how a young boy traveled from Africa to make it big in Australia.

Similarly, Dema, a member of the Bankstown Bullsharks, a multicultural team of teenage schoolgirls in Western Sydney, stars in the AFL’s 2018 campaign. Also a part of the AFL NSW/ACT All Nations squad at the Female Diversity Championships last year,  Dema’s story highlights her journey to playing for her local club and state in Australian Football.

Damien Hardwick’s leadership of the Richmond Tigers to the 2017 Toyota AFL Premiership is also set to feature.

AFL CEO, Gillon McLachlan said the campaign was inspirational for all levels of Australian Football, from the grassroots through to both the elite men’s and women’s competitions.

“The common thread of these three stories is that at one point in their lives the subjects made a conscious decision that never was not an option and Australian Football has provided a vehicle for their personal successes,” Mr McLachlan said.

“Whether it’s on a Saturday at a suburban footy ground, or at the MCG on Grand Final Day, these films show that this game can win over every heart and create opportunities no matter the level of play.

“As we embark on the final rounds of the second NAB AFL Women’s season, Dema’s story is a reminder to all of us – players, coaches, administrators and fans – that together we’re inspiring the next generation,” he said.

With the 2018 Toyota AFL Premiership Season nearly upon us, Mr McLachlan said that Aliir and Damien’s stories stood out for what’s possible and provided hope for the year ahead.

“Richmond’s premiership gave so many fans hope for what’s possible for their teams, but within teams you have individuals who have persevered and reached remarkable heights, just like Aliir,” he said.

The short films have been created by the AFL with the creative agency Clemenger BBDO Melbourne and will be released today on the channels of Seven, Foxtel and the AFL website and social media platforms.

Please see below for the synopsis on each film.

Dema and The Bankstown Bull Sharks

Dema is a young girl of Muslim background from Bankstown, New South Wales who had no interest in AFL. That all changed when a teacher from her school introduced AFL to their PE classes and her love of the game began to grow. Needing to convince her conservative parents – who originally said never – to play AFL, she eventually joined the Bankstown Bull Sharks in the heart of Western Sydney. Initially hesitant, Dema’s father Stephen is now the team’s number one supporter, encouraging her along the way and ultimately to participate in the 2017 Female National Diversity Championships.

One of the most inspiring stories in the AFL is the journey of Aliir Aliir. Born to Sudanese parents in a Kenyan refugee camp, before immigrating to Brisbane before Perth, Aliir has taken one of the most unusual paths to the AFL’s elite game. Having initially been overlooked by recruiters and believing he would never make it into the AFL, Aliir is now part of the Sydney Swans. Regularly training on Lance ‘Buddy’ Franklin and being guided by some of the team’s best in Josh Kennedy and Dan Hannebery. Aliir is fulfilling his dream, and the dream of so many kids, in being a leading AFL footballer.

The Richmond Football Club embarked on the 2017 Toyota AFL Premiership Season with a renewed focus to ignore the turbulent offseason and perception that a flag was never going eventuate for the current playing group. The club, their coach Damien Hardwick and captain Trent Cotchin searched within themselves to persevere and continue with their common goal. Their persistence delivered Richmond their first Grand Final victory in 37 years on Saturday  September 30, 2017.

To view the Don’t Believe in Never films visit: TheNevers.afl (that’s all that needs to be typed into an Internet browser).