Briody sisters having a “BALL!” 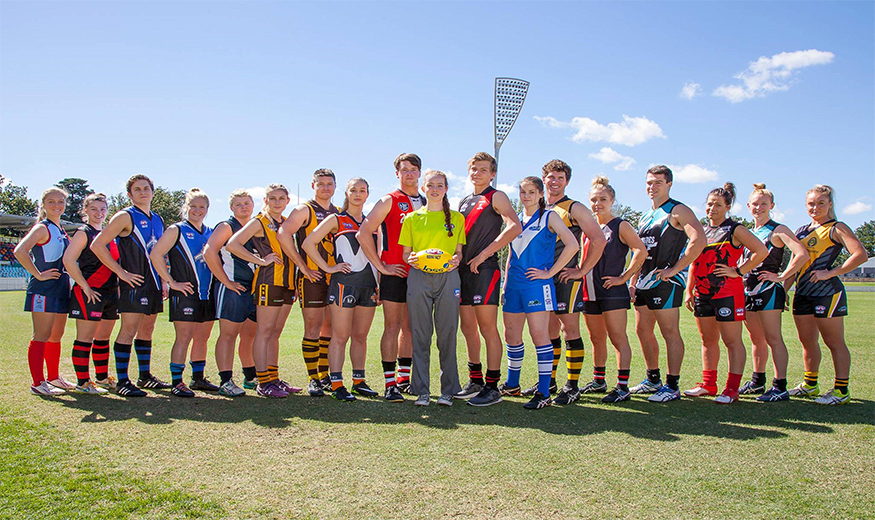 Round 7 of the 2017 Toyota AFL Premiership season is set to celebrate Community Umpiring Week – an initiative to encourage people to get involved in umpiring AFL at a grassroots level.

“Community Umpiring Week supports all umpires throughout the community level who play an important role every weekend.

“Similar to the numbers of female participants, female umpire numbers are also rising, with an increase of 18 percent.”

Ciara and Catriona Briody are two female umpires making huge progress on the field. Aged sixteen and eighteen respectively, and part of the AFL Canberra league, the sisters are avid sports lovers with AFL winning them over in recent years.

“The fast pace and intensity of AFL is what initially drew me to love the game,” says Ciara.

“It’s such an exciting and engaging game to watch and be a part of.”

The Briody’s started umpiring in 2015. At the time they were dipping their toe in umpiring a number of different sports, but after they gave AFL a go, they never turned back.

At the end of that year, sixteen-year old Ciara was awarded the AFL Canberra Rusty Taylor Scholarship, which aims to develop and nurture up-and-coming umpires across the Canberra region.

The award is named in honour of Russell Taylor, a long serving member of the AFL Canberra community who umpired five First Grade Grand Finals in the ACT.

In 2016, both sisters umpired Senior Football games in the AFL Canberra league. Their efforts did not go unrewarded, with Ciara appointed to the 2nd Grade Grand Final, and Catriona the U18s.

Whilst many may expect the two sisters to be competitive in their rise up the AFL umpiring ranks, they say they are constantly bouncing off each other to improve.

“We both love umpiring and try our hardest to do our best at every game,” says Ciara.

This year has been a year of continued growth, for Ciara in particular. The scholarship winner is now a NEAFL rookie, where she is expected to debut in a few weeks.

Ciara also sees the AFL Women’s competition as an excellent pathway for women to get involved in AFL.

“I have loved watching the growth of women’s AFL, both around Australia with the AFLW and in Canberra.

“I was given the opportunity to be the emergency goal umpire for the AFLW GWS GIANTS versus Western Bulldogs game in Canberra, and it was an incredible experience to be a part of.”

As for what the future holds, Ciara has no doubts as to where she wants to end up.

“Making it to AFL one day would be the ultimate goal,” she said.

“But in the next few years I would like to be doing regular NEAFL games, and making it onto the AFLW panel would be amazing.”

The AFL Umpires Development team have recently launched a new campaign – ‘Australian Sports’ Best Kept Secret’ – which encourages those who love the game to consider umpiring.

For more information, please visit the AFL Umpiring website. This site includes information on how to become an umpire along with resources to assist learning the role of the umpire.

OPSM is the Official Sponsor of the AFL Umpires, supporting community development and the umpire talent pathway at grassroots levels.

AFL NSW/ACT also acknowledges the contribution of Tyrepower for their support of umpires in New South Wales and the ACT.