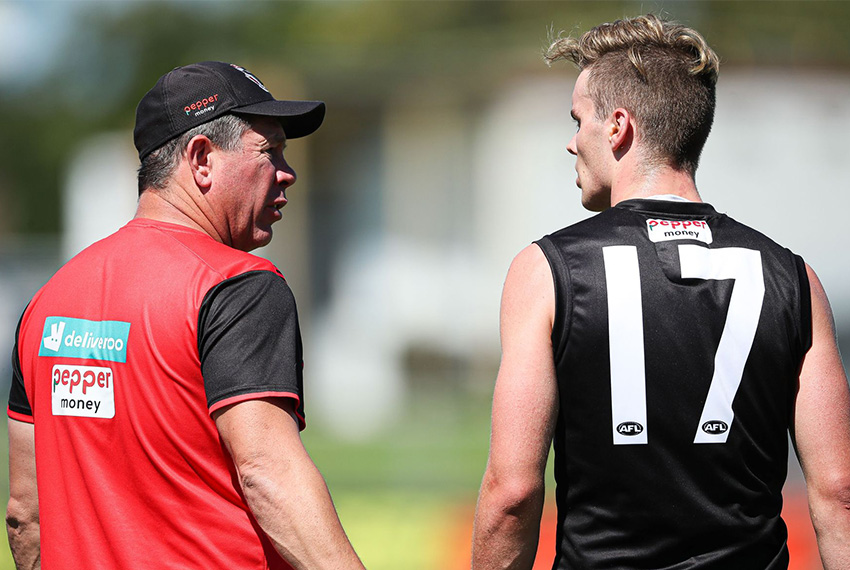 Mature-age St Kilda recruit Tom Highmore has shot into round one calculations as the Saints prepare to shuffle their defensive half in the wake of the club’s latest injury setback.

Highmore, who turns 23 on Wednesday, stood out playing across half-back for the ‘A’ side in the Saints’ 18-versus-18 intraclub on Thursday.

Coach Brett Ratten suggested the 193cm South Adelaide product could develop into playing a “second or third” tall role in defence after being taken at pick No.45 in the 2020 NAB AFL Draft.

Veteran defender Jake Carlisle played in the opposing ‘B’ side on Thursday, while ex-Hawk James Frawley watched on recovering from hamstring tightness.

It leaves spots up for grabs alongside Dougal Howard and Callum Wilkie with important backman Ben Paton to miss the entire season and Jarryn Geary sidelined for at least the opening month of the campaign.

Ratten refused to guarantee Highmore a berth in round one but acknowledged there was an opportunity.

“Young Tommy Highmore is nearly a Wilkie clone in the way he goes about it, but he’s a right-footer and he played exceptionally well mopping up,” Ratten told AFL.com.au after Thursday’s hitout.

“He kicks the ball well, he’s brave, he’s a good size… so whether he’s a second-tall defender, or third, he’s sort of in that category.

“I had a one-on-one meeting with him the other day and we spoke about that; it’s about getting your opportunity and taking it and he’s up for the challenge.

“At 22, he’s a long-term view too, for us. Whatever he does this year will be a bonus because he will improve, he will adapt to the AFL (and) the way it’s played.

“He’s already mentioned: ‘Gee, it’s a bit quicker, if you don’t get your positioning right you get caught out’. And I’m like: ‘Exactly’.”

Highmore was named in the 2019 NEAFL Team of the Year playing for the Canberra Demons before crossing to the SANFL last year.

He will get another chance to stake his claim when the Saints take on North Melbourne in a practice match on Thursday before their AAMI Community Series date with Carlton on March 4.