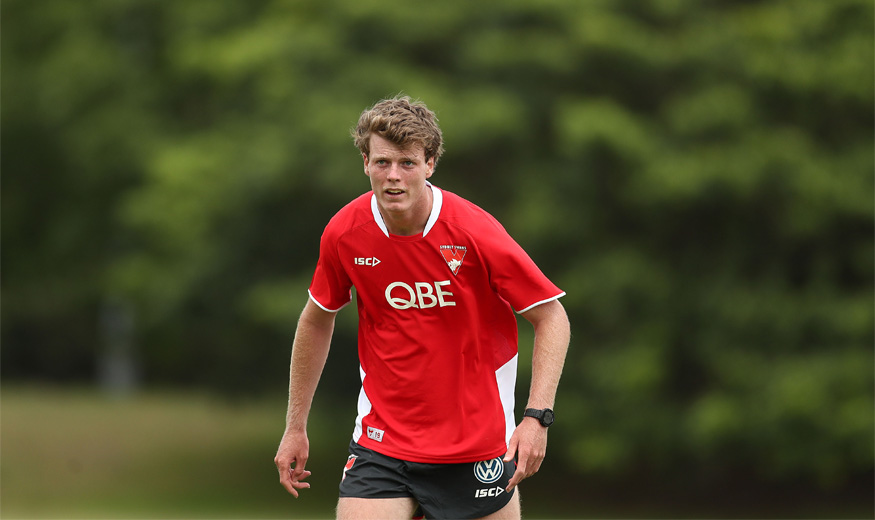 Nick Blakey “couldn’t be happier” to have signed with the Sydney Swans as a draftee after “18 years of work”, but the towering forward’s eyes are now firmly fixed on taking his chance by the scruff of the neck.

Blakey progressed from the QBE Sydney Swans Academy and on to the Swans’ list last November, with the youngster signing with the red and white via its first-round selection at the AFL Draft.

Blakey took a big step forward in the pre-season sweat as he threw on his No. 22 guernsey for his first match simulation of the summer on Friday.

And after landing a spot on Sydney’s list to fulfil a lifelong dream, he’s now single-minded on continuing to build on the road to the 2019 campaign.

“I’m extremely excited and ready to go, but I know there’s a lot of hard work in place,” Blakey told SwansTV.

“Getting drafted was half the dream and now I want to play senior football – and it’s the same with any other first-year players here, and all the other boys that haven’t played a game as well.”

Blakey on Friday managed to spare a moment amid the full-charge grind of the pre-season to reflect on the past couple of months – and he said time had flown since the night of the AFL Draft.

But the new Swan said having a number of star Sydney players to look to for direction had kept his light pointed ahead.

“It’s gone really fast. You get drafted about eight weeks ago and then you’re here two days later and training with all the senior boys,” Blakey said.

“It’s been pretty surreal training alongside Josh Kennedy and Luke Parker and sitting next to ‘Buddy’ Franklin. The senior guys are so helpful whether I’m down back or up forward. ‘Buddy’s’ always telling me what patterns to lead, and Rampe’s telling me how to use my body and what he doesn’t like against him. Those boys are just so helpful, they’ve been around the club for so long and they’ve played so many games.”

Blakey had the boxing gloves on during the opening half but crossed the white line for the third and fourth quarters.

Lightning-quick draftee Justin McInerney, crafty small forward Sam Wicks and a number of other first-year Swans were in the thick of action themselves, and Blakey says exposing the body to the rigours of a match is crucial in the lead-up to the season.

“Running around the boundary and actually playing a game are just completely different,” Blakey said.

“It was my first one of the pre-season and I was blowing a bit, but I came on in the second half when all the boys were already a bit tired.

“You’ve got to play these match simulations and you’ve got to try to get match-fit as quickly as possible.”