Blacktown blues for Allies and Rams 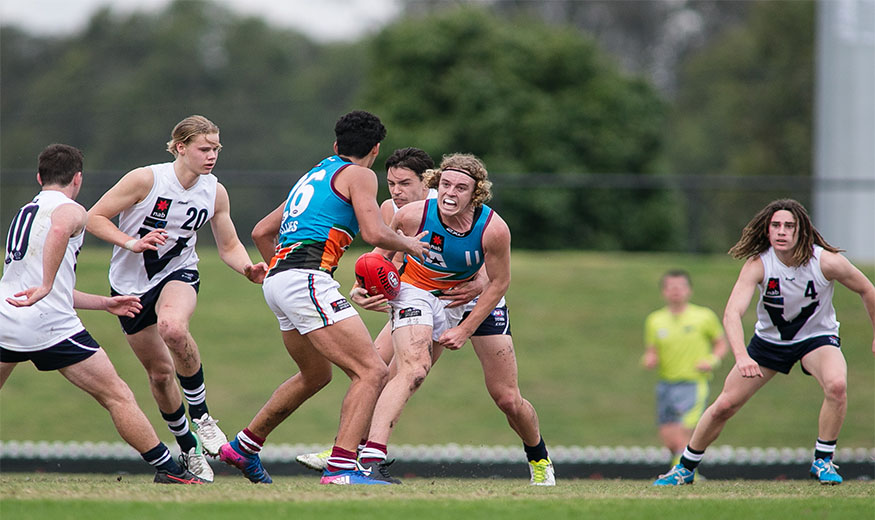 Blacktown International Sportspark played host to both the U17 Futures and NAB AFL U18 Championships today in better than expected conditions.

Following days of rain in Sydney, the sun came out to dry the track but it would not assist the home teams.

The first match of the day saw the U17 NSW/ACT Rams play Tasmania in the first round of the U17 Futures Series.

Though the Rams were able to keep pace with Tasmania in the opening term through a goal to Riley Corbett, it would be one way traffic for the remainder of the match.

Tasmania opened the gap to 44 points by half-time, and by the final term, were in front by 51 points.

Despite a marked effort by NSW/ACT’s Matthew Walker who kicked three goals for the afternoon, the Rams were unable to get within reaching distance, going down by 64 points.

The AFL NSW/ACT Rams will play Queensland on 10 July 2017 for the second match of the U17 Futures Series to be played on the Gold Coast.

Following the Rams’ defeat, the Allies took on Vic Country in a rematch of last year’s U18 Championships Grand Final.

The Allies flew out of the gates when Sydney Swans Academy member, Jack Hardman kicked true within the first 15 seconds of the match.

Though the Allies were running fast, the game was ground to a halt as Hardman’s Swans Academy teammate, Luke Robertson fell to a broken leg, having to be stretchered from the field.

As the game resumed, so did the barrage of AFL NSW/ACT kicked goals, with Jack Powell shooting through the middle to see scores level at half-time.

Only a goal on the siren could separate the two teams at the main break after goals from Sydney Swans Academy player, Nick Blakey and Queensland’s, Harry Simmington kept the Allies in the hunt.

Tasmania’s Hugh Dixon proved the difference in the third, adding three goals to his name and the scoreboard, seeing the Allies up by 12 points going into the final term.

But after a stellar comeback from a fired up Vic Country, that 12-point lead to the Allies would soon turn deficit as the final siren sounded.

The Allies will play South Australia in Round 2 of the NAB AFL U18 Championships on 17 June 2017 at Adelaide Oval.