The benchwarmers on the brink of the big time 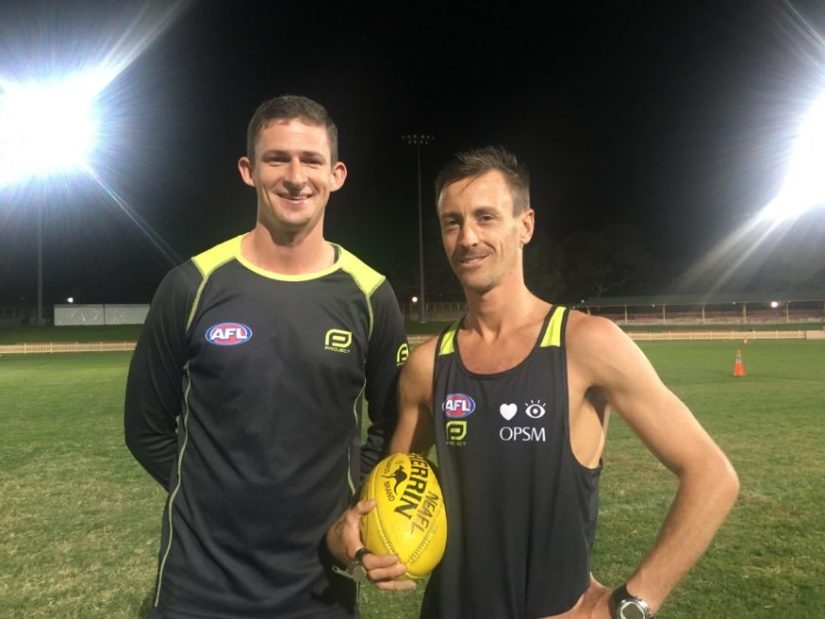 They are ‘benchwarmers’, but in the best sense of the term. Not out of favour with the coach and set to ride ‘the pine pony’, but on the precipice of the big time.

After years of toil and training, Sydney’s Cam Barr (30) and Matthew Baigent (27) have been made 2018 AFL Rookie listed umpires, joining the ten from the AFL NSW/ACT region already on the official AFL Umpires list.

Assigned to Sydney Swans and GWS GIANTS matches played in Canberra and Sydney, both Barr and Baigent hold the uneasy task of preparing to run on and umpire, in the unlikely event that one of the assigned officials cops an injury. For Barr, the call up has already come, but for Baigent, the nervous anticipation continues to rise.

The reason both Barr and Baigent got into umpiring over a decade ago remains a similar tale for current local umpires who sign up – cash. Already playing and consuming the game of Aussie Rules, Barr saw umpiring as an opportunity to be more involved in the sport he loved, and get paid.

“I had a friend that was earning money doing the same thing [umpiring] and I also wanted to stay involved after I stopped playing for my junior club,” says Barr who began umpiring at age 16.

“Umpire training was at the same venue as my junior club, Penshurst, and a few of my mates wanted to give umpiring a go, so we did. It was a great cash earner too,” explains Baigent who signed up in 2006.

From there, Barr and Baigent climbed the umpiring ranks. Barr rose a little more freely – by volunteering his services time and again – compared to Baigent who was placed on the newer AFL only state-based pathway AFL Umpiring Pathway.

“I started field umpiring in juniors and boundary umpiring seniors in my first year of umpiring,” says Baigent.

“I progressed through the various development Academies and camps, while umpiring through the junior and senior grades, which turned into umpiring AFL Sydney Premier Division. Eventually I progressed into NEAFL and from there, I was AFL Umpire Rookie listed.

Dealing with injuries any AFL player would come up against – six shoulder dislocations to be exact – it has been a tough road for Baigent to end up where he is, on the brink of debut.

Barr made his AFL debut recently, at the Round 3 Sydney Derby a few weeks back. It was in 2016 though, where he first sat on the bench as an Emergency Umpire.

“It was a game in Canberra – the GIANTS versus Geelong,” Barr recalls.

“It was the day that Shane Mumford put that huge tackle on Mitch Duncan.

“It’s always a funny feeling because in a way you do your usual pre- game but without the game after. I guess I was nervous, in that I wanted to be on top of all the obscure rules and duties of an Emergency Umpire – but it wasn’t hard to relax and enjoy the experience.”

Now having somewhat been a part of that iconic Shane Mumford tackle, Barr’s eventual call up to the big time came when Lance ‘Buddy’ Franklin created another history making moment for the Swans.

Having been told just prior to the final quarter by Troy Pannell – one of the three Field Umpires assigned to the game – to start warming up because he had strained his hamstring, Barr still didn’t think he was crossing the boundary onto the field.

“My first thought was that he would just push through and maybe sit in the ‘End Zone’ for the rest of the game.

“It was soon clear however, that he had to come off, so I simply got ready as quick as possible and ran on. There really wasn’t that much time to think about it. I took a few minutes to settle in, but then I just tried to treat it as normal as possible.

Again, Barr found himself involved in an iconic AFL moment. With the GIANTS breathing down the necks of the Swans in the late stages of the final quarter, Franklin kicked the match-sealer from 70m out from goal – just metres in front of Barr’s eyes.

“It was obviously a huge moment in the game and a great moment to have a very small part of.

“I remember the crowd noise more than anything. I almost didn’t even realise it was Buddy until after he kicked it,” says Barr.

The AFL Umpiring department’s recruitment tagline is, ‘Get in the Game’, and with moments like this experienced by Barr, there is no greater way to be in it.

An intrinsic part of the game, but often in the background, AFL Umpires can sometimes hold an air of mystery about them. Who are they? What did they do to get there? What does being an Umpire even involve?

In 2017, GPS trackers were placed on professional AFL Umpires to ask the age-old question – who runs further, the players or the Umpires? The result: Umpires.

As such, there is a mountain of fitness work that goes into being an umpire. At a community level, training occurs twice a week – the same as any local player – where the officials will be taken through a set of theory, as well as practical hands on training. And they run, and run, and run.

On top of their normal day jobs – Baigent who works for AFL NSW/ACT as a Facilities Coordinator and Barr who is in Sales – the Umpires spend their weekends away from their loved-ones, travelling wherever they’re needed.

“As NEAFL Umpires, twice a month we are travelling to Darwin, Brisbane or Canberra,” says Baigent.

“It takes a large amount of time out of your weekend but it’s also a part of the fun. And the Velocity Points aren’t bad either!”

AFL Community Umpiring Week is running across the upcoming round of local football with the aim to encourage people to get involved in umpiring Australian Football at the grassroots level.

Clubs across Australia are being asked to pause and acknowledge the work of the umpires who take hold of their games every week. More information is available at umpire.afl. This site includes information on how to become an umpire along with links to resources to assist learning the role of the umpire.