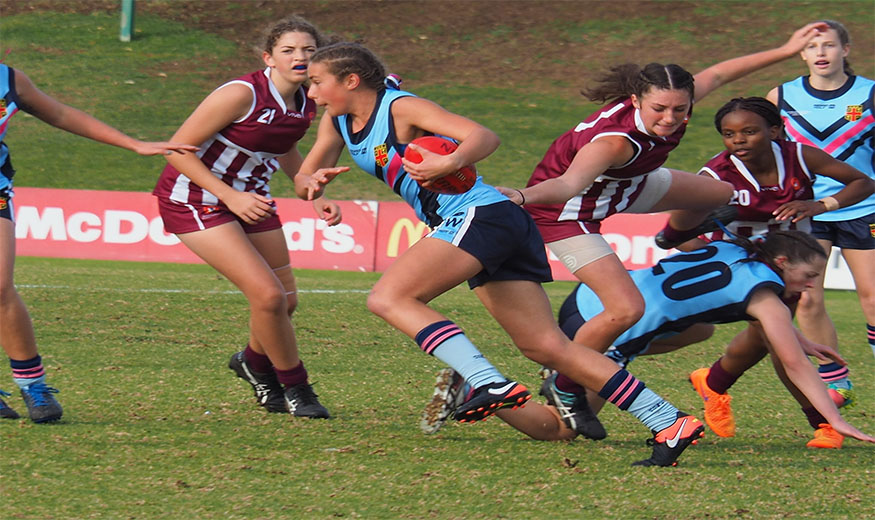 At the beginning of 2017, Western Sydney’s Amy Sligar had next to no Aussie Rules experience. By July, she had made the All Schools AFL Under 15s All Australian squad.

Taking to the game like a duck to water, Sligar and her twin sister, Natalie were spotted by AFL NSW/ACT Local Area Manager, Ash Moeller during a match for their school, St Patricks College, Campbelltown.

Recognising their strong athletic ability and aerial skills, Moeller knew their talents would be able to take them far in the game of AFL.

“Amy has an elite running ability and a strong pair of hands over hear head,” said Moeller.

“Standing at 176cm tall at 15-years-old, Amy has all the attributes to forge a career playing the great game.”

Coming from a sporting background, Sligar is also a state silver medalist in the Under 15s Girls 3000m long distance run with an impressive time of 10.45 min, and has also represented New South Wales in the Under 15 Netball side.

Making Sligar’s achievements in AFL all the more impressive, she has only played seven games with her local side, the Camden Blues Youth Girls, juggling netball commitments during the same season. However, Sligar is says that her experience in other sports, is what is giving her an edge in AFL.

“I love the freedom you have on the field and the fitness that is required to play a hard game of AFL,” says Slager.

“My netball and running background provided a good base for me to build my AFL skills around.

“The thought of playing a sport as fun as AFL at a professional level and the fact that this sport is the fastest growing female sport is exciting.”

Last week, Sligar and the New South Wales U15s Girls side played out an impressive National Under 15 School Championships in Perth.

Defeating Queensland, the Northern Territory and Western Australia on their way to the Grand Final against Victoria, the New South Wales side performed strongly in the week long competition.

Eventually going down to tournament favourites, Victoria in the Grand Final, the team were able to catch the eye of All Australian selectors, claiming four spots the team.

“To be selected as part of the All Australian AFL side is a great privilege and honour. It is great to be recognised for all of my hard work both at the fields and at home.

“I had to work a lot on my kicking and to be able to do that it required a lot of time, patience and persistence.

“I was thrilled to be at that level playing for my state and coming second at Nationals, but as my mum said it was ‘the icing on the cake after a fantastic week’. I learnt a lot at Nationals and it is an experience I will never forget.”

For now, Sligar is setting her sights on being part of a team to take the Camden Blues Youth Girls side to 2017 Premiership glory.

“We are currently on the top of the ladder but have tough competition from the teams below us.

“My long term goal is to one day play in the AFLW. This is the ultimate goal and it would be a great honour to play at this level.

“I want to encourage younger girls to get involved with AFL because it is great for fitness and I believe that playing a team sport is important for learning skills for life. AFL teaches the skills of teamwork, fair play and is lots of fun.”