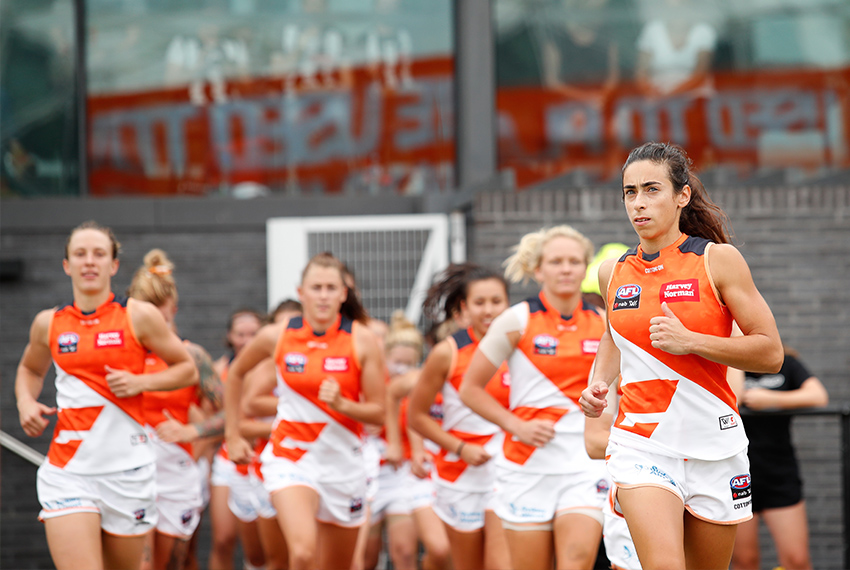 Farrugia, 34, is a PE teacher from Parramatta who took up Australian Rules football in her 20s as a way to keep fit, with the journey leading her to become the club’s first-ever women’s captain in the inaugural AFLW season.

Current vice-captain and 2018 Gabrielle Trainor Medallist Alicia Eva will take over as captain for the 2020 season.

An inspirational leader, Farrugia has played every game of AFLW over the first three seasons and retires as a three-time Mostyn Medal winner as AFL Sydney’s best and fairest winner.

Farrugia said it’s time for her to step away from the game.

“I’m incredibly honoured to have led this football club for three years and I’m grateful for the opportunity the AFL Women’s competition has afforded me,” she said.

“This isn’t a competition you can do half-hearted and the time is right for me to make some time in my life for everything else.

“I put everything I had physically and emotionally into my elite football career and I’m looking forward to the next chapter for me.”

“It’s hard to put into words the impact Amanda has had on our football club,” he said.

“For a young woman who grew up in Sydney with no connection to Australian Rules football to be the first captain of our club is a phenomenal achievement.

“For all she’s achieved on the field, it’s the way she’s carried herself off the field that leaves a lasting legacy.

“Her leadership has helped us set up an incredibly strong AFLW program at our club while the time she gives back to her community, fans and young girls everywhere is second to none.

“She won’t be out on field in GIANTS colours any more but she’ll always be a GIANT, with her impact to be felt for years to come.

“We are fortunate to have an incredibly strong leadership group underneath Amanda and we welcome the appointment of Alicia as captain.

“She’s incredibly driven and sets such a high standard on and off the field that she will step into this role with ease.”

“It’s an absolute honour,” she said.

“I arrived at this club in the second season and it’s truly become my home. I’m so passionate about what we’re creating here.

“‘Fridge’ leaves behind enormous shoes to fill and an incredible legacy, which we as a leadership group will look to carry on.”

Eva won the GIANTS 2018 club champion award and was named in the Virgin Australia All Australian team. She is also employed in the men’s program as the NEAFL backline coach.

The GIANTS’ AFLW team begins pre-season training on Monday ahead of the 2020 season.