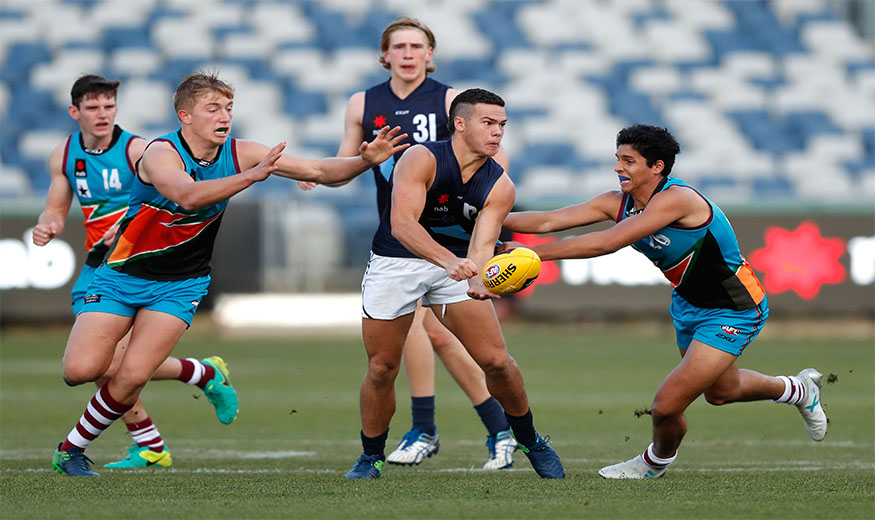 The Allies have finished their NAB AFL U18 Championships off with a bang, defeating Vic Metro by three points.

It was a fast start to the Round 5 match, with the home team bolting out to a 12 to zero lead early on at Geelong’s Simonds Stadium.

The game balanced throughout the first quarter with the Northern Territory’s Zac Bailey getting the Allies on the board. By quarter time, the Allies were just seven points behind the already-declared title holders.

The Allies were jolted into action within minutes of the second quarter. GWS GIANTS Academy member, Jarrod Brander slotted a slick snap in the goal square to get the visitors within one-point.

Rain started to slow the match with skills dropping off in the wet, but Brander continued his stellar second term, amassing five marks for the game, just five minutes into the quarter.

Late inclusion, Brendan Myers of the GWS GIANTS Academy, was also making the most of his opportunity to play at the national level again, named as one of the Allies best for the first half.

Vic Metro went into the main break with a four-point lead, after some inaccuracy in front of goal kept the Allies in with a chance.

Brander continued his impressive match by opening the Allies second half with a goal.

The home team put early pressure on the Allies in the third, but the visitors refused to budge.

Tasmania’s imposing forward, Hugh Dixon put the Allies in front with his seventh goal of the series, as the Allies started to sniff an upset.

Sambono was on the end of some quick scrambling in the Allies forward half, extending the Allies lead prior to three quarter time.

After a steadying few minutes from both teams later in the quarter, Sam Hayes kicked a goal for the Vics in the final 30 seconds. This put the home side in front by five points at the break– a position possibly undeserved after an impressive quarter from the Allies.

Vic Metro opened the scoring in the last quarter, however the Allies were able to switch on in time, with a goal from Dixon keeping them close.

From there, the Allies were able to dominate possession. Frustrated, Vic Metro’s Sam Hayes gave away a free-kick in the Allies’ forward -50, allowing the Allies to goal through Dixon once more.

The Vics started to kick away again, getting out to an 11-point lead at one stage, but the Allies refused to let the match go.

Some goal brilliance from Sydney Swans Academy product, Jarrod Osbourne and another straight shot from Brander put the Allies up, again, by one-point.

It was up to the Allies to strike back as Vic Metro kicked away, but thanks to perennial goal scorer for the Allies, Sydney Swans Academy’s Jack Hardman, the visitors kicked ahead just in time.

Despite some late behinds from the the Allies, the visitors had claimed their first win of the Championships against the previously undefeated title holders.